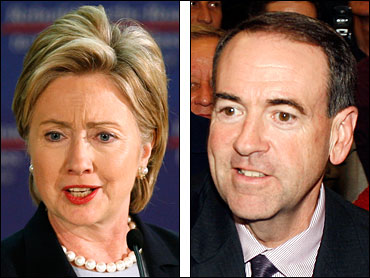 It's unlikely that Arkansas papers on Hillary Rodham Clinton's years as the state's first lady will be released before the 2008 election, says the director of the Little Rock library that holds Bill Clinton's gubernatorial files.

Limited staff and delays in renovations for two new archives have prevented processing thousands of boxes of documents from the administrations of former Govs. Clinton and Mike Huckabee, including a handful of files on Mrs. Clinton, now a senator from New York and the front-runner for the Democratic presidential nomination.

The papers aren't likely to include any bombshells about the former first lady, said Bobby Roberts, director of the Central Arkansas Library System, which is storing the Clinton papers at its main library. At any rate, he doesn't expect any state documents on Sen. Clinton to be released before the election.

"I'd be surprised if they release the papers, but they've surprised me before," he said.

The papers of two of Arkansas' most prominent political leaders - former Govs. Clinton and Huckabee - remain locked in storage four years after both promised to donate them to two separate archival projects.

In late 2003, Huckabee, now a Republican contender for the presidency, announced that he would donate to his alma mater, Ouachita Baptist University, the papers from his 10½ years as governor and three years as lieutenant governor. The school in Arkadelphia 65 miles south of Little Rock is keeping the documents in storage but won't transfer them to its campus until a $1.5 million renovation of the library is completed.

"They were given on the condition that we would receive them when the library was renovated," said Bryan McKinney, general counsel for the private college. Until the papers are transferred, the school is paying for their storage, but Huckabee controls who has access, McKinney said. A spokeswoman for Huckabee's campaign did not respond to a phone call or an e-mail requesting access to Huckabee's gubernatorial papers.

Likewise, former President Clinton essentially controls access to who can view the 2,000 boxes worth of documents on his 12 years as governor and two years as state attorney general. Stored on the top two floors of the main library in downtown Little Rock, the papers were donated to the library system in 2003 for an $18 million history center under construction.

The center, which will also house papers from the administrations of Dale Bumpers, Winthrop Rockefeller, Jim Guy Tucker and Frank White, is to open next summer.

Under an agreement signed with the former president in 2003, Clinton or his designees must approve the release of any documents requested. Library staffers have been processing the gubernatorial papers, and Roberts said he hopes to have some available to the public when the center opens next year.

Hillary Rodham Clinton's papers as first lady are not included in the collection, but Roberts said the archive includes about 34 files that mention her or are associated with her. Nearly all of those are files from Bill Clinton's gubernatorial staff, such as memos, that mention the first lady.

"They're really files from the point of view of the governor's staff rather than from her point of view," Roberts said.

Bruce Lindsey, Clinton's designated agent on the documents' release, did not respond to a request sent through Roberts by The Associated Press earlier this month concerning access to the documents regarding the former first lady.

The library has allowed the public access on a limited basis. In 2005, a Rutgers University student studied the gubernatorial papers to research Clinton's decision in 1980 to accommodate Cuban refugees at Fort Chaffee in western Arkansas, where they eventually rioted to protest conditions.

In a separate matter, Hillary Rodham Clinton has faced criticism over the slow pace of processing records about her time at the White House.

A number of requests are pending before the federally operated Clinton presidential library, among them a 2006 request from Judicial Watch, a conservative public interest group, for her official calendar, schedule and day planner during the White House years. Judicial Watch has filed federal lawsuits to try to speed the release of those documents, as well as records about her tenure as head of a White House task force on health care during her husband's administration.