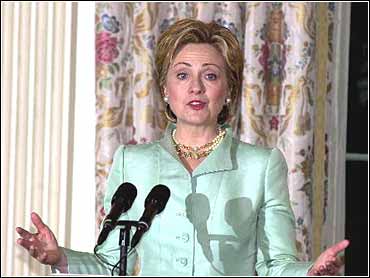 Expensive gifts poured into the Clinton White House in the weeks between Hillary Rodham Clinton's election to the Senate from New York and her swearing-in last year, according to a new congressional investigation.

The congressman who oversaw the investigation called Sen. Clinton's acceptance of the gifts "disturbing at best."

At a Tuesday hearing, Rep. Doug Ose, R-Calif., said, "The current system is broken and needs to be fixed."

He said his investigators found undervalued gifts, others that were never reported and still more that disappeared.

The examination of gifts to the Clintons also found that 17 separate gifts of china, cutlery and furniture worth more than $75,000 arrived in December 2000 alone, at a time when the Clintons were looking to furnish two newly purchased homes, one each in Washington and Chappaqua, N.Y.

Ose also noted that the gifts were received "after the former first lady's election to the U.S. Senate and before she was subject to Congress's very strict gift acceptance rules."

The timing of the gifts had not been made public before. As a senator, Mrs. Clinton is prohibited from accepting most gifts worth more than $50. But since the presents arrived while she still was first lady, no such limit applied.

The Clintons took with them $360,000 worth of large gifts when they left the White House in January 2001, according to the yearlong investigation by a House Government Reform subcommittee. The Clintons also left with additional gifts too small to trigger public disclosure.

Investigators alleged the Clintons undervalued dozens of gifts, including a suit from Yves Saint Laurent reported as being worth $249, a dollar below what was then the threshold for public disclosure. The investigators did not say how much they believe the suit was worth.

Dozens of gifts were labeled "lost" or "misplaced" in the records investigators examined, including a $4,200 18-karat gold saxophone pin and a $1,200 rug from Pakistan.

The hearing was intended to bolster support for Ose's legislation to change the rules governing gifts to presidents. He wants to consolidate responsibility for receiving, cataloging and storing gifts in one government office. Now, six agencies are involved.

The National Park Service, one of the agencies, already has tightened its policy for accepting donations.

Bruce Lindsey, a confidant of the former president, declined to testify at Tuesday's hearing, Ose said. Lori Krause, who investigators said was a political appointee who headed the White House gifts office, also was invited to testify. Krause did not return telephone calls Monday.

Controversy over presidential gifts first arose last year when the Clintons disclosed they had received $190,027 in the president's final year in office. According to investigators' records, the Clintons returned 21 items worth $44,000 a year ago after some donors complained the gifts were for the White House, not the former firs family.

"This is really kind of sad," Lockhart said. "The core right-wing of the Republican party is refusing to let go of an issue that was fully resolved last year."

The subcommittee's Republican staff members briefed reporters Monday on the investigation on condition of anonymity.