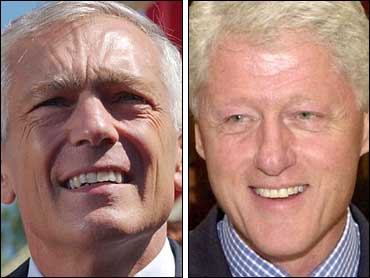 Democratic presidential candidate Wesley Clark includes a clip of Bill Clinton in a new television commercial, attempting to align himself with a popular former president and fellow Arkansan.

Mr. Clinton and his wife, Sen. Hillary Rodham Clinton of New York, have said they have no plans to endorse a candidate during the contest for the Democratic nomination. Still, Clark's campaign has embraced his parallels with Mr. Clinton throughout the race, and he is the first of the nine candidates to feature Clinton in an ad.

"It's a brilliant stroke," said Donna Brazile, a Democratic consultant who ran the 2000 campaign of Al Gore, President Clinton's vice president. "It shows General Clark as someone who is close to Bill Clinton. This will help him galvanize Democratic primary voters. They love Bill Clinton."

The clip, one of several scenes in the 30-second ad, shows Mr. Clinton at the White House placing the Presidential Medal of Freedom around Clark's neck in honor of Clark's work in Kosovo as NATO's supreme allied commander. The scene also is in a 17-minute film about Clark's life that the campaign gives to supporters.

As Clinton appears, an announcer says Clark is a leader who has been "decorated for valor and for service in our country."

Clark is spending $125,000, a moderate amount, to run the ad for a week on stations that broadcast into New Hampshire, where he trails front-runner Howard Dean and John Kerry in polling for the Jan. 27 primary. The spot soon will run in states with primary contests on Feb. 3.

The ad, which also shows Clark with soldiers, a short-order cook and schoolchildren, describes the retired Army general as the kind of leader who not only has seen ordinary people do extraordinary things in life, but who has been honored for such accomplishments.

Clark's campaign said the former president had no involvement in the commercial and that his permission was not needed because the footage previously had been used elsewhere. However, the campaign said Mr. Clinton was made aware the clip would be used. Clinton aides did not return phone messages seeking comment.

Chris Lehane, a Clark spokesman, said the Clinton clip was meant to validate Clark's military success in Kosovo by showing him receiving the medal.

"Given the fact that it's coming from his former commander in chief, it's particularly compelling," Lehane said.

President Clinton awarded Clark the medal in August 2000, several months after Clark was relieved of his NATO command duties earlier than expected.

The ad also is another example of how Clark's campaign has highlighted his ties to Mr. Clinton.

Dozens of former Clinton staffers are working on Clark's campaign. The campaign's recently released film about Clark's life, called "American Son," is reminiscent of a film about Bill Clinton and was made by the same person who produced that well-received piece.

Their early lives also are similar. Both were raised as Baptists by their mothers after their fathers died while they were young. Both earned Rhodes scholarships to study at Oxford University in the late 1960s.

Brazile said all the Democratic candidates have embraced President Clinton in some way, including by supporting his policies on the campaign trail and in stump speeches. However, she said, Clark earns points for using Mr. Clinton in a TV ad.

"This gives the Clark campaign something that it's been lacking until now: national stature," she said. "If there's one candidate who's making a move from the back seat to the driver's seat, it's General Clark."

Clark's rivals were quick to complain that he was using an image of Mr. Clinton when he did not become a registered Democrat until after he entered the race in September and when he has praised Republican presidents.

"He shouldn't be able to wipe away that record with one photo op of him and Clinton," said Stephanie Cutter, a Kerry spokeswoman.

Jay Carson, a Dean spokesman, said the ad "doesn't make up for a lifetime of voting Republican. We're looking forward to seeing the Nixon-Reagan-Bush-Rumsfeld-Cheney ad."

Carson said Dean isn't concerned that voters will take the image of President Clinton as an endorsement of Clark.