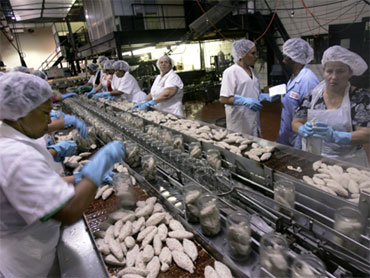 Free the gefilte fish! Just in time for Passover, Secretary of State Hillary Rodham Clinton will try to resolve a trade dispute holding up a huge shipment of American-caught fish destined for seder dinners in Israel.

Clinton drew chuckles from a congressional panel when she said that getting nine containers of Asian Carp filets from an Illinois fishery to a processing plant in Israel in time for the Jewish holiday "sounds to me like one of those issues that should rise to the highest levels of our government."

She made the pledge Thursday to Rep. Don Manzullo, R-Ill. Manzullo said Israel slapped a 120-percent import duty on the fish, and he asked for help before the first seder on March 29.

"I will take that mission on," she said.

For the record, there's no such thing as "a gefilte fish." Geflite fish is a traditional Jewish preparation involving one or several types of ground fish (such as carp, pike, and herring) mixed with spices, ground vegetables and sometimes grains such as matzoh meal.