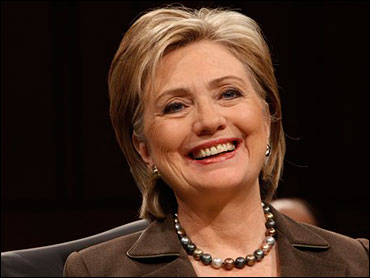 The chamber voted 94 to two to confirm Clinton, a fierce rival of President Obama for the Democratic nomination. Though some Republicans had expressed concerns about conflicts of interest related to Clinton's husband, former President Bill Clinton, they were not enough to derail her nomination.

Clinton will now be immediately sworn in at a private ceremony. She faces daunting foreign policy challenges, including wars in Afghanistan and Iraq and the conflict in the Middle East.

New York Governor David Patterson has yet to appoint a replacement for Clinton in the Senate. He is expected to announce his choice by Saturday.

Sen. John Kerry, chairman of the Foreign Relations Committee, was among the senators who said a swift confirmation was necessary so that foreign policy issues could be quickly addressed.

"It is essential that we provide the president with the tools and resources he needs to effect change, and that starts with putting a national security team in place as soon as possible," Kerry said, according to the Associated Press.

Another was John McCain, who opposed Mr. Obama for the presidency. As the AP notes, the Arizona Republican said voters "want us to work together and get to work."