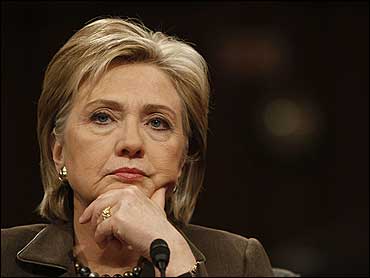 Humanitarian aid to the people of Gaza has become an increasingly hot topic ahead of U.S. Secretary of State Hillary Clinton's visit to the region next week.

Clinton aides have reportedly been relaying messages to Israeli leadership critical of the obstacles placed in getting aid to the Gaza Strip, according to the daily newspaper Haaretz in Jerusalem.

"Israel is not making enough effort to improve the humanitarian situation in Gaza," senior U.S. officials reportedly told their Israeli counterparts last week, according to the paper, which adds that more critical comments are expected by the U.S. Middle East Envoy George Mitchell, who will be in Israel this weekend.

In the U.S., Jewish leaders in Clinton's home state of New York have expressed outrage at the alleged criticism leveled by Clinton's state department.

"I liked her a lot more as a senator from New York," State Assemblyman Dov Hikind, D-Brooklyn, told CBS station WCBS-TV in New York. "Now, I wonder as I used to wonder who the real Hillary Clinton is."

For her part, Clinton has said recently ahead of her trip: "We are working across the government to see what our approach will be."

CBS News correspondent Robert Berger in Jerusalem reports that there has been no significant backlash in the Israeli media or by the Jewish state's politicians over the comments made by "U.S. officials" to the Haaretz newspaper, which seem to be the cause of so much consternation in New York.