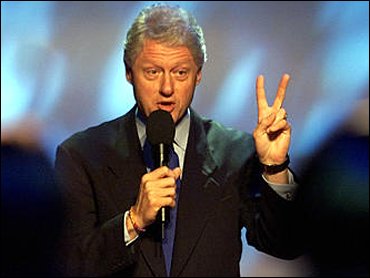 Former President Bill Clinton says a former two-term president should be able to return to office later in life but that the Constitution would have to be amended.

"It wouldn't affect me, but for future generations the 22nd amendment should be modified," Clinton said Wednesday during an appearance at the John F. Kennedy Library and Museum.

"There may come a time when we have elected a president at age 45 or 50 and then 20 years later the country comes up with the same sort of problems the president faced before, and the people would like to bring that man or woman back," he said.

At present, the constitutional amendment, enacted after Franklin Roosevelt was elected to four terms, limits presidential service to two terms in a person's lifetime. But many state or local term limit measures instead limit the number of consecutive terms a person may serve.

Clinton spoke during an informal discussion with historian Michael Beschloss. Beschloss asked him if historians should concern themselves with the private lives of presidents. Said Clinton: "I think you do have to deal with it to some extent if you're an historian."

But he said there was "a whole lot of difference between writing a retrospective biography of somebody when all of the records are in ... and just, you know, essentially feasting on them under the guise of trying to enlighten the public. ... It's a grab for power, ratings, or position."