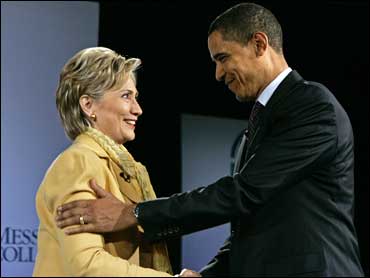 Democratic Sen. Hillary Rodham Clinton said Sunday the potential for life begins at conception as she and presidential rival Sen. Barack Obama answered questions about faith and religion in both their personal lives and the public discourse.

In a forum devoted to an issue rare on the campaign trail, the two White House hopefuls talked about the presence of God in their lives and how often they read the Bible, as well as divisive issues including abortion, abstinence and human rights within the context of faith.

The two are reaching out to people of faith in Pennsylvania, which holds its primary on April 22. GOP nominee-in-waiting John McCain did not participate.

Clinton was asked whether life begins at conception - which abortion opponents contend is a reality that makes any termination of a pregnancy the ending of a life.

"I believe the potential for life begins at conception," Clinton said. "For me, it is also not only about a potential life. It is about the other lives involved. ... I have concluded, after great, you know, concern and searching my own mind and heart over many years... that individuals must be entrusted to make this profound decision, because the alternative would be such an intrusion of government authority that it would be very difficult to sustain in our kind of open society."

The New York senator added that abortion should remain legal, safe and rare.

The two candidates appeared separately at Messiah College near Harrisburg, Pa., and briefly met as Clinton left the stage and Obama took her place. The moment of pleasantries and handshakes belied days of angry accusations between the two over Obama's comments about bitter voters in small towns.

Obama lashed out at Clinton in an earlier Sunday appearance, mocking her vocal support for gun rights and saying her record in the Senate and as first lady belied her stated commitment to working class voters and their concerns.

Asked at the faith forum whether life begins at conception, Obama said he didn't know the answer.

"This is something that I have not, I think, come to a firm resolution on. I think it's very hard to know what that means, when life begins. Is it when a cell separates? Is it when the soul stirs? ... What I know, as I've said before, is that there is something extraordinarily powerful about potential life and that that has a moral weight to it that we take into consideration when we're having these debates."

Clinton is a Methodist. Obama is a member of Trinity United Church of Christ in Chicago, where the retired pastor, the Rev. Jeremiah Wright, touched off a furor with sermons criticizing the United States. The words of Obama's pastor have dogged the campaign, and the candidate reiterated his condemnation of Wright's remarks but stood by his church.

"Pastors are imperfect. Certainly, the membership is imperfect. I, as somebody who is sitting in the pews as a sinner, is imperfect," he said. "And, you know, that doesn't detract from, I think, what the church is supposed to be about, which is to worship God and proclaim the good news."

Clinton said she has felt the gift of God in her life and said she makes decisions on tough moral issues such as abortion and the treatment of alleged terrorists after prayer, contemplation and study.

"I don't pretend to even believe that I know the answers to a lot of these questions," Clinton said. "I don't."

One of the toughest questions she faced was why God allows innocent people to suffer. Clinton said that has been the subject of much debate for generations, and added: "I don't know. I can't wait to ask him."

When asked if she thought God wanted her to be president, Clinton quipped, "I could be glib and say, well, we'll find out."

She said she doesn't presume anything about God and she thought Abraham Lincoln was right to not act as if God is on our side. "In fact, our mission should be on God's side," Clinton said.