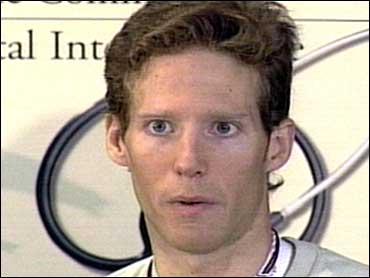 Hopelessly pinned by a boulder that rolled onto his arm in a remote canyon, adventurer Aron Ralston says he first took a dull pocketknife to his forearm after three days, but couldn't cut the skin.

In his first meeting with reporters since he walked, bloody and dehydrated, out of a remote Utah canyon, Ralston described Thursday what it took for him to eventually do the unthinkable — cutting off his own arm to save his life.

"I'm not sure how I handled it," the mechanical engineer-turned-adventurer said, the stump of his right arm in a sling. "I felt pain and I coped with it. I moved on."

A day after his first attempt to cut his arm, Ralston went through the motions of applying a tourniquet, laying out bike shorts to use for padding. He worked out how to get through the bone with the "multi-tool"-type knife he carried.

"Basically, I got my surgical table ready," the 27-year-old said.

On the fifth day, he summoned up all his technique and nerve.

"I was able to first snap the radius and then within another few minutes snap the ulna at the wrist and from there, I had the knife out and applied the tourniquet and went to task. It was a process that took about an hour," he said.

Slim and pale with short reddish-brown hair, Ralston made frequent references to prayer and spirituality in his news conference. He said he felt a surge of energy on the third day, which happened to be the National Day of Prayer.

"I may never fully understand the spiritual aspects of what I experienced, but I will try," he said. "The source of the power I felt was the thoughts and prayers of many people, most of whom I will never know."

Ralston's ordeal began April 26, during what was supposed to be a day trip near Canyonlands National Park, Ralston, 27, became hopelessly pinned as he scrambled over three boulders wedged into a narrow canyon. One of the boulders, weighing an estimated 800 pounds, rolled as he climbed over it, trapping his right arm against a cliff face.

He tried chipping away with his knife at the boulder and the cliff, and tried to rig a way to lift the boulder off himself with climbing gear. He decided to sacrifice his arm to save his life after going through most of his three liters of water and his food: two burritos and some crumbs clinging to candy bar wrappers.

Even after his excruciating operation, what Ralston had to do to survive required skills beyond the abilities of most.

On May 1, he crawled through a narrow, winding canyon, rappelled down a 60-foot cliff and walked some six miles down the southeastern Utah canyon.

By the time he encountered hikers and then rescuers, Ralston was just two miles from the nearest road.

For reasons he wouldn't explain, Ralston withheld some details of his story. A publicist told reporters there would be no follow-up interviews soon and no interviews whatsoever with the doctors who treated him.

Ralston gave a partial answer to one frequently asked question: What kind of knife did he use?

He described it as a cheap imitation of the Leatherman brand multi-tool, a folding device that typically has knife blades, pliers, screwdrivers and other gadgets. He didn't give the brand, calling it "what you'd get if you bought a $15 flashlight and got a free multi-use tool."