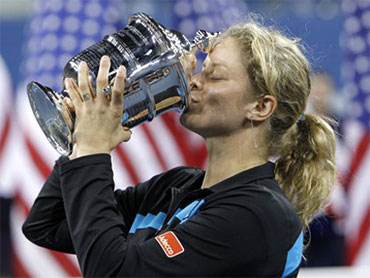 Her game is now as good as it gets on this stuff.

Clijsters is the first woman since Venus Williams in 2000-01 to win the title in Flushing Meadows two years in a row. And Clijsters' U.S. Open winning streak is actually up to 21 matches because she also won the 2005 title. She missed the tournament in 2006 because of injuries, including wrist surgery, and skipped it the next two years while taking time off to get married and have a baby.

Her 2½-year-old daughter, Jada, was in the stands at Arthur Ashe Stadium on Saturday night, munching on a thick slice of watermelon, then sucking on some candy. Sort of like "Take Your Daughter to Work Day," except how many kids get to watch Mom win a Grand Slam championship?

Last year in New York, when Jada pranced around the court during the postmatch ceremony, Clijsters became the first mother since Evonne Goolagong Cawley in 1980 to take home a major trophy.

On Saturday, in addition to another silver cup, Clijsters was awarded $2.2 million - the champion's check of $1.7 million, plus another $500,000 for finishing second in the U.S. Open Series standings that take into account hard-court tuneup tournaments.

"I've always felt more comfortable on this surface. Not just this year, but even when I was 14, 15, 16," the 27-year-old Clijsters said in an interview the week before the U.S. Open began. "Everything comes easier."

After losing the first four Grand Slam finals of her career, Belgium's Clijsters has won her last three. Perhaps that will give some hope to Russia's Zvonareva, who is now 0-2 in major championship matches, after losing to Serena Williams in the Wimbledon final in July.

Not since 1995 has a U.S. Open women's final lasted three sets, and this one wasn't about to end that trend. Indeed, you have to go back to 1976 to find a women's final in which the loser won only three games.

Put simply, the second-seeded Clijsters was too dominant; the seventh-seeded Zvonareva too shaky.

Over and over, Clijsters would scramble to balls that seemed out of reach and get them back over the net, sometimes doing full splits right there along the baseline. She compiled a 17-6 edge in winners, and made nine fewer unforced errors than Zvonareva, 24-15.

Clijsters broke twice to take the first set, and she did it by letting Zvonareva cause her own problems. Clijsters needed only four winners in that set, because Zvonareva made 13 unforced errors, including dumping a backhand into the net on the last point.

After that mistake, Zvonareva told a ballkid to get out of the way, so she could take a practice swing on her backhand side.

When Zvonareva failed to get to a backhand and fell behind 40-love in the opening game of the second set, she cracked her racket against the court twice, breaking it, and earning a warning from the chair umpire.

Then things got worse for Zvonareva, known for losing her temper during matches.

She yelled at herself after two unforced errors in the second game of that set, and proceeded to double-fault to get broken at love and trail 2-0. All things considered, it was nothing compared to the tantrum Zvonareva threw in her fourth-round loss at last year's U.S. Open, when she wasted six match points. She bawled. She pounded her palm on her leg while sitting on the court. She slammed her racket against her leg. She begged the chair umpire to let her have some scissors so she could cut tape off her knees.

Zvonareva seemed to be much better at harnessing her emotions of late, perhaps thanks in part to her habit of placing a towel over her head during changeovers to block out distractions. That worked wonders at Wimbledon this summer, and for nearly two weeks at the U.S. Open.

But Clijsters never gave her a chance to get into this match. It was so lopsided, CBS analyst John McEnroe felt compelled to tell viewers: "This might be the most I've ever wanted Kim Clijsters to lose serve. She's such a great person, but this is difficult to watch right now."