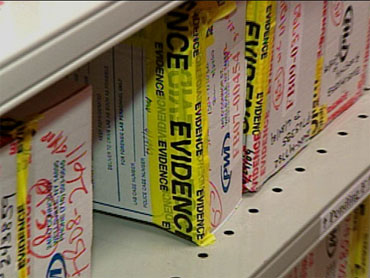 The Cleveland Police Department announced it has found over 1,400 untested rape kits in storage dating back to 1993 and will now send all rape kits collected after January 1, 2010 to the state lab to be tested.

The department says once all 2010 kits have been tested, they will test the 1,426 untested kits.

"We're going to test everything," said the spokesperson for the department Sgt. Sam Morris. He added that the department will even test kits from victims who don't want to cooperate with an investigation so that they can find and identify serial rapists.

This represents a sea change at a department that has been sharply criticized for shoddy sexual assault investigations. Cleveland has more reported rapes per capita than any major city in the nation.

Just one year ago, CBS News called the Cleveland Police Department to ask how many untested rape kits were in storage. The department responded that they did not know and would not count.

CBS News was collecting the information as part of a five month investigation that exposed over 20,000 untested rape kits sitting in police departments nationwide.

Cleveland was one of 12 cities including Anchorage, Baltimore, Birmingham, Chicago, Cincinnati, Columbus, Indianapolis, Jacksonville, Oakland, Phoenix and San Diego, where officials said they had no idea how many untested rape kits were in storage.

The Cleveland Police Department says it is not done counting its rape kits and will continue to sift through old evidence looking for untested kits dating back to 1993. Kits older than 1990 fall outside of Ohio's statute of limitations.

Dan Myers, a Cleveland law school student who saw the CBS Evening News report last fall, started asking why his own city would not count the rape kits they had in storage.

Myers asked his friends and fellow church members if they would write letters to the city asking them to count the kits.

Myers collected over 100 letters and brought them to a meeting with city officials this spring. The officials said they would let him know when they had a final count.

Reached today in Cleveland, Myers responded to the department's change in policy, "I think in general it's a great first step...it never made sense to me why kits weren't tested."

Cleveland Police Department spokesman Sam Morris says there are a number of reasons as to why a kit may not have been tested in the past, "The rape victim decided not to participate in the investigation; the rape victim recanted the reported crime; a lack of further, substantive investigative leads; and/or no biological/trace evidence was found."

Meanwhile, Cleveland cops have been under fire since last fall for fumbling the case of alleged serial killer and convicted rapist Anthony Sowell profiled in a CBS News investigation

In response, the Cleveland mayor formed a panel

Cleveland civil rights attorney David Malik who is representing some of the families of the victims found in Sowell's house said the news that the department would be testing rape kits was an "exciting, awesome and progressive use of Cleveland Police Department resources."