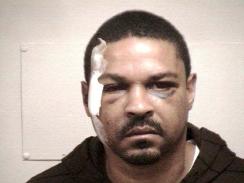 The Cleveland Police Department announced on Friday that charges have been filed against four white police officers for assaulting an African-American male suspect on the evening of January 1, 2011.

The officers who were charged with felonious assault are Martin Lentz, 34, Kevin Smith, 25, Paul Crawford 28, and Christopher Randolph, 26.

CBS News has learned the alleged beating of the man named Edward Henderson was filmed by a police helicopter hovering overhead. The video of the beating has been described to CBS News by Henderson's attorney as "shocking." A judge has so far refused to release the footage to the media.

Henderson was arrested after a high speed chase.

David Malik, a civil rights attorney representing Henderson, told CBS News, "We are grateful there is no police cover up in this incident - we are equally grateful to the officers who shed light on the events that led to Mr. Henderson's injuries and now it's time for due process to run its course."

The officers wrote in a police report obtained by CBS News that Henderson sustained the injuries that are visible in his mugshot when his car crashed at the end of a high speed chase. But Henderson's criminal defense attorney Daniel Chaplin told CBS News his client's injuries came from being kicked in the head by the police officers. Chaplin says Henderson's airbag had never been deployed.

Henry Hilow, attorney for Kevin Smith, said Henderson took the police on a chase that involved more than 40 officers and was only detained after he crashed.

Martin Lentz's lawyer, William Doyle, said his client is innocent and he intends to vigorously defend his case. "Marty comes from a very distinguished family of law enforcers in Cleveland," Doyle said, "It's incredible that this poor young man is going through this. He is innocent and we hope that at the end of the day we will be able to demonstrate this."

Messages for the other two officers' attorneys were not returned by publication time.

Jeff Follmer, vice president of the Cleveland Policeman Patrolmen's Association said the association supported "the officers of the law and their actions." Follmer says there are no other similar cases that have been prosecuted in the Cleveland area.

However, the Cleveland division of the NAACP told CBS News that this is not the first case of excessive police force in the area and calls for the incident to be "investigated thoroughly."

"Generally there are opportunities for communities and police departments to work together better and often times we don't," said Stanley Miller the executive director of the Cleveland NAACP. "Clearly if the police did something wrong they need to be prosecuted to the fullest extent of the law," Miller told CBS News.