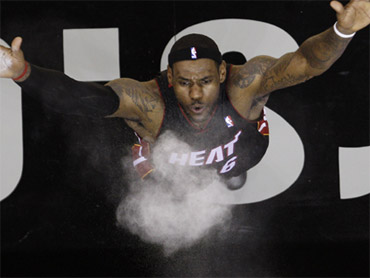 This column CBSSports.com. It was written by Gregg Doyle.

Don't give them what they expect to see. Not any of them. Not the abnormally large police presence that will be on hand, guarding the hallway outside the Miami Heat locker room and protecting The Chosen One's path to and from the court. Not the NBA, which advised the Cavaliers to multiply its security for this one game. Not the Cavaliers, who have taken all sorts of proactive measures to make sure you, yes you, don't turn Cleveland into an international punch line.

Don't do it. Not to James, not to yourself, not to us.

Believe me, Cleveland, I understand your hurt. Felt it myself, as viscerally as I've ever felt anything about any sports story. When he left last summer, James left in a way that stained all involved, himself included. He kept everyone in the dark, even his -- especially his -- loyal following in Cleveland. Lots of us misread that as good news. No way, we thought, would James kiss off Cleveland on national television without so much as a hint that it was coming. He couldn't be that stupid. He couldn't be that cruel.
Turns out, yes he could.

Now it's our turn. James threw the first shot, a sucker-punch we didn't see coming. Now comes Cleveland's retaliation, but you know how it goes with these things: The retaliator always looks worse. The innocent victim -- Cleveland, in this case -- overreacts and becomes the bad guy, allowing the real bad guy to sneak out the side door.

Don't let it happen that way.

Look, we in the media haven't exactly set a good example. We've whined and moaned about James' departure, spilling our words like blood, as if James had wounded us. He didn't wound us. Or you, for that matter. So don't follow my lead from July. Don't follow the lead of this clown in the Cleveland newspaper, who played the role of spurned lover to cartoonish perfection last week, urging you to "boo and taunt away," not if booing and taunting leads to something deeper, something darker.

And for the love of God, don't follow the lead of an idiot Esquire writer named Scott Raab, a Cleveland native who has taken to Twitter to stalk James -- cursing him out, calling him Biblically juvenile names, behaving like the worst fan in the world. Which he may well be. Scott Raab may well be the worst Cleveland fan in the world. But he has a book to sell, and here I go, helping him pick up a few more Twitter followers. Maybe the joke's on me.

Whatever the case, don't follow Raab's lead. In a perfect world, the crowd Thursday night would embrace an idea gaining traction on Twitter. Other than outright indifference, the best possible way to deal with a clown like James is to laugh at him, but that won't happen. Cleveland is too mad, and this is your chance to show it. Fine -- but don't follow the footsteps that Clevelanders laid in 2001, when thousands of you reacted to a controversial call in an NFL game by throwing plastic bottles onto the field. Not all of the bottles were empty, which means that wasn't merely stupid behavior -- that was criminal behavior.

But nine years have passed. That mistake is in the past. Don't repeat it Thursday.

The Cavaliers are going to help by refusing to sell bottles. If you want a beer, they're going to treat you like children and pour the beer into a cup, then hand it to you. That's how little everyone thinks of you, Cleveland. They don't trust you with a bottle of Miller Lite.

Rumors flew late last season about a romantic interlude between one of James' teammates and one of James' family members. You know the rumor. It's OK to know the rumor. Just don't flaunt the rumor, hoping a TV camera transmits it worldwide. Why would you want to do that? That behavior wouldn't hurt James -- it would hurt Cleveland. The rest of the world would watch that footage and think to itself, "No wonder James left."

Is that what you want? For LeBron James to become the sympathetic victim?

Play this wrong, and that's what will happen. Play this wrong, and you'll become Nebraska. That is not a bad fan base, not from what I've seen, but it's being portrayed that way after a few disgruntled Nebraska fans sent threatening messages to Big 12 commissioner Dan Beebe recently. Some of the messages were so scary -- one voice mail reportedly told Beebe, "If I see you in the street I'm going to hit you in the head with a bottle and stab you" -- that the Big 12 cancelled the trophy presentation after Nebraska won the Big 12 North Division on Saturday.

All it takes is one idiot, one loser, to ruin it for everyone.

Don't be that idiot on Thursday night.

Unmarked cops will be in the crowd at Quicken Loans Arena, looking for the irrational, the deranged, the dangerous. They'll be trying to stop you, but there will be too many of you to stop. All it takes is one person to turn Cleveland -- and by extension, Ohio -- into a punch line. Don't be him. Don't be her.