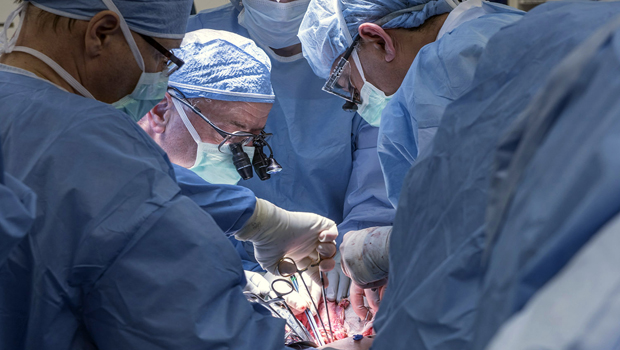 CLEVELAND -- Surgeons in Cleveland say they have performed the nation's first uterus transplant, a new frontier that aims to give women who lack wombs a chance at pregnancy.

In a statement Thursday, the Cleveland Clinic said the nine-hour surgery was performed a day earlier on a 26-year-old woman, using a uterus from a deceased donor.

The hospital had long been planning for such a surgery, announcing last fall a clinical trial that would attempt 10 transplants in women with what's called uterine factor infertility (UFI), meaning they were born without a uterus or with uterine abnormalities that block pregnancy.

"Women who are coping with UFI have few existing options," Dr. Tommaso Falcone, Chair of the Women's Health Institute at the Cleveland Clinic, said in a post on the clinic's website in November. "Although adoption and surrogacy provide opportunities for parenthood, both pose logistical challenges and may not be acceptable due to personal, cultural or legal reasons."

The hospital said it wouldn't release any more details until a press conference next week, except to say the woman's condition was stable.

Other countries have tried womb transplants -- Sweden reported the first successful birth in 2014, with a total of five healthy babies so far. Doctors there say the still experimental treatment might be an alternative for some of the thousands of women unable to have children because they were born without a uterus or lost it to disease.

Others have questioned whether such an extreme step would be a realistic option for many women. It's fraught with medical risk, including rejection of the transplant and having to take potent immune-suppressing drugs for a transplant that, unlike patients who receive a donated kidney or heart, isn't life-saving.

The Cleveland Clinic's Dr. Andreas Tzakis said the risks aren't greater than those for other transplants but is considered life-enhancing, like transplants of the face or hand.

One important difference: "Unlike any other transplants, they are 'ephemeral,'" Tzakis said last year in a statement announcing the study. "They are not intended to last for the duration of the recipient's life, but will be maintained for only as long as is necessary to produce one or two children."

Removing a uterus from a deceased donor requires more than a normal hysterectomy, as the major arteries also must be removed. The womb and blood vessels are sewn inside the recipient's pelvis. Before closing the abdomen, surgeons check for good blood flow and that the attachment to the ligaments is strong enough to maintain a pregnancy.

If a woman is approved for a transplant in the study, she would first have to have eggs removed from her ovaries, like is done for in vitro fertilization, and then freeze the embryos. Those could be implanted only 12 months after the transplant heals, if it's successful.