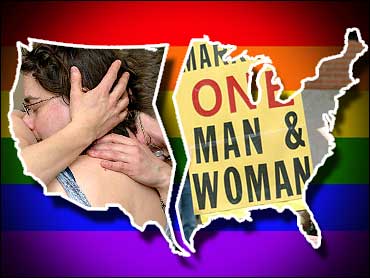 Unitarian Universalist ministers Kay Greenleaf and Dawn Sangrey were charged with multiple counts of solemnizing a marriage without a license, the same charges leveled against New Paltz Mayor Jason West, who last month drew the state into the widening national debate over same-sex unions.

The charges may be the first brought against clergy for performing same-sex unions, according to the Human Rights Campaign, a Washington, D.C.-based gay rights group.

"As far as I know that's unprecedented," said Mark Shields a spokesman for the Human Rights Campaign. "It's ridiculous that prosecutors would spend their time charging anyone with a crime who is simply trying to unite two people with basic rights and protections."

Williams said he decided to press charges because the marriages were "drastically different" from religious ceremonies because Greenleaf and Sangrey publicly said they considered them civil. Some Unitarian ministers, Greenleaf included, have been performing ceremonies for gay couples since before the issue entered the national debate.

"It is not our intention to interfere with anyone's right to express their religious beliefs, including the right of members of the clergy to perform ceremonies where couples are united solely in the eyes of the church or any other faith," Williams said.

Williams had said before Monday's charges were announced that it would be more difficult considering charges against clergy because the clergy had not sworn to uphold the law.

He said his decision to press charges was influenced by New York Attorney General Eliot Spitzer's opinion that gay marriage is illegal in New York and by the injunction issued by a state supreme court justice against West.

The ministers performed the weddings March 6.

On Saturday, Greenleaf and Sangrey were joined by a third minister, the Rev. Marion Visel, in performing 25 more ceremonies, which went off without protests or arrests. It could not immediately be learned if more charges would be brought.

The ministers' lawyer, Robert Gottlieb, was unaware of the charges when contacted by The Associated Press and declined immediate comment.

Since West joined San Francisco Mayor Gavin Newsom as the only elected officials to marry gay couples, the issue has spread rapidly across the country. Courts, legislatures and elected officials are wrestling with what supporters say is a matter of civil rights and opponents call an attack on the time-honored institution of marriage.