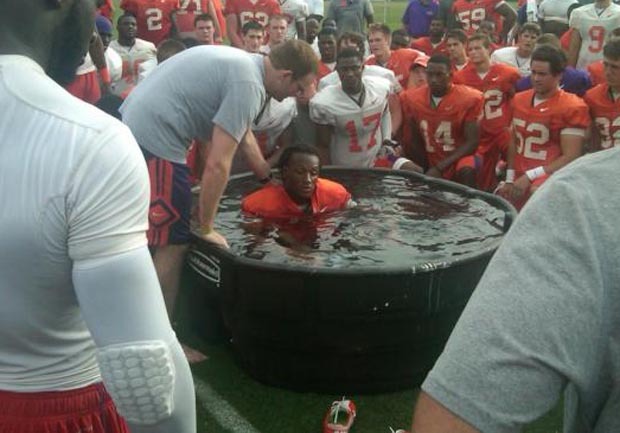 (CBS News) Like all ACC football teams, the Clemson Tigers went through several weeks of sweaty, bone-crunching practices leading up to the regular season. Said offensive coordinator Chad Morris: "There were some times in fall camp, it was pretty intense."

How intense? Amid the full-contact drills and triple-digit South Carolina heat, one player underwent a religious transformation - and his teammates were all witnesses.

In his tweet, Scott called the baptism the "highlight of my week."

Two days after the Christian rite, Hopkins made his own highlight of the week -- catching a school-record 13 passes, including a 4-yard touchdown, as the Tigers beat Auburn 26-19.

Hopkins is the second Clemson player to be baptized in a month. All-American wideout Sammy Watkins, who was suspended for the first two games of the season after an offseason drug arrest, was baptized last month.