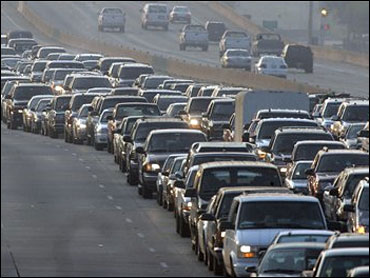 Hundreds of thousands of people across the Houston metropolitan area struggled to make their way inland in a vast, bumper-to-bumper exodus Thursday as Hurricane Rita closed in on the nation's fourth-largest city with winds howling at 150 mph.

Drivers ran out of gas in 14-hour traffic jams or looked in vain for a place to stay as hotels hundreds of miles in from the coast filled up. Others got tired of waiting in traffic and turned around and went home.

An estimated 1.8 million residents or more in Texas and Louisiana were under orders to evacuate to avoid a deadly repeat of Katrina.

The storm weakened Thursday morning from a top-of-the-scale Category 5 hurricane to a Category 4 as it swirled across the Gulf of Mexico, and forecasters said it could lose more steam by the time it comes ashore late Friday or early Saturday. But it could still be a dangerous storm, one aimed straight at a section of coastline with the nation's biggest concentration of oil refineries.

"The water is going to rise very, very rapidly. If you stay there, you don't have a chance," warned KHOU meteorologist Dr. Neil Frank, a former head of the National Hurricane Center.

The line of cars heading away from the Texas coastline said it all, reports CBS News correspondent Lee Cowan. Highways leading inland out of Houston were gridlocked, with bumper-to-bumper traffic for up to 100 miles north of the city. Gas stations were reported to be running out of gas. Shoppers emptied grocery store shelves of spaghetti, tuna and other nonperishable items.

Houston's Astrodome, which had been housing Katrina evacuees, is now empty, reports

In New Orleans, meanwhile, Rita's outer bands brought the first measurable rain to the city since Katrina, raising fears that the patched-up levees could give way and cause a new round of flooding.

To speed the evacuation, Gov. Rick Perry halted all southbound traffic into Houston along Interstate 45 and took the unprecedented step of opening all eight lanes to northbound traffic out of the city for 125 miles. I-45 is the primary evacuation route north from Houston and nearby Galveston.

But some people were actually trying to get to Houston: CBS News correspondent Peter King found a Continental flight from Orlando packed. "A number of the people I've spoken to are trying to get home so they can get some of their things together and then head right back out of town and evacuate up north," he reports.

Trazanna Moreno tried to leave Houston for the 225-mile trip to Dallas on U.S. 90 but turned back after getting stuck in traffic.

"We ended up going six miles in two hours and 45 minutes," said Moreno, whose neighborhood is not expected to flood. "It could be that if we ended up stranded in the middle of nowhere that we'd be in a worse position in a car dealing with hurricane-force winds than we would in our house."

Hotels filled up all the way to the Oklahoma and Arkansas line.

At 2 p.m. EDT, Rita was centered about 435 miles southeast of Galveston and was moving at near 9 mph. It winds were near 150 mph, down from 175 mph earlier in the day. Forecasters predicted it would come ashore somewhere along a 400-mile stretch of the Texas and Louisiana coast that includes the Houston-Galveston area near the midpoint.

Forecasters warned of the possibility of a storm surge of 15 to 20 feet, battering waves, and rain of up to 15 inches along the Texas and western Louisiana coast. Three to five inches of rain were possible over New Orleans, where engineers raced to fortify the city's Katrina-damaged levees and pumps.

Hurricane-force winds extended up to 85 miles from the center of the storm, and even a slight rightward turn could prove devastating to the fractured levees protecting New Orleans, where CBS News correspondent Jim Krasula (audio) reports residents are keeping a careful watch on Rita.

The U.S. mainland has not been hit by two Category 4 storms in the same year since 1915. Katrina came ashore Aug. 29 as a Category 4.

An estimated 1.3 million people in Galveston, the Corpus Christi area, Beaumont, low-lying parts of Houston, and mostly emptied-out New Orleans were under mandatory evacuation orders. And about 500,000 in southwestern Louisiana were told to get out as well.

Oil refineries and chemical plants in and around Houston began shutting down, and hundreds of workers were evacuated from offshore oil rigs.

The Texas governor recalled Texas National Guardsmen and other emergency personnel and equipment from Louisiana to get ready for Rita.

Environmentalists warned that the stretch of coast threatened by Rita is home to 87 chemical plants, refineries and petroleum storage installations, raising the possibility that the storm could cause a major oil spill or toxic release. Southeastern Texas is also home to more than a dozen active Superfund sites.

NASA evacuated Johnson Space Center and transferred control of the international space station to the Russians. Storm surge projections put most of the NASA space center, situated about 20 miles southeast of downtown Houston, underwater in the event of a hurricane above Category 2.

The last major hurricane to strike the Houston area was Category-3 Alicia in 1983. It flooded downtown Houston, spawned 22 tornadoes and left 21 people dead.

Although Houston is 60 miles inland, it is a low-lying, flat, sprawling city whose vast stretches of concrete cover clay soil that does not easily soak up water. The city is beribboned with seven bayous that overflow their banks even in a strong thunderstorm. Those bayous feed into the Ship Channel, Clear Lake and Galveston Bay.

Scientists have warned that the storm surge from a hurricane could cause the bayous' currents to reverse, pushing water back into the city and swamping mostly poor, Hispanic neighborhoods on the southeast side of Houston.

Along the Gulf Coast, federal, state and local officials heeded the bitter lessons of Katrina: Hundreds of buses were dispatched to evacuate the poor. Hospital and nursing home patients were cleared out. And truckloads of water, ice and ready-made meals, and rescue and medical teams were put on standby.

Texas authorities also planned to airlift at least 9,000 people from Beaumont and Houston, including nursing home residents and the homeless.

"Now is not a time for warnings. Now is a time for action," Houston Mayor Bill White said.

Galveston was a virtual ghost town by late Wednesday. The coastal city of 58,000, situated on an island 8 feet above sea level, was nearly wiped off the map in 1900 when an unnamed hurricane killed between 6,000 and 12,000 in what is still the nation's deadliest natural disaster.

"Not a good picture for us," LeBlanc said.

In Corpus Christi, about 180 miles down the coast from Galveston, buses were sent to evacuate hundreds of people with no other transportation. But the mandatory evacuation order was later dropped in favor of a voluntary one after it appeared that the city would escape a direct hit from Rita.

Crude oil prices rose again on fears that Rita would destroy key oil installations in Texas and the gulf or otherwise disrupt production. Texas, the heart of U.S. crude production, accounts for 25 percent of the nation's total oil output.