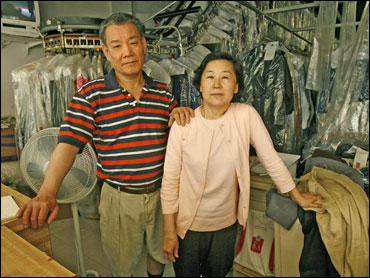 The owners of a dry cleaner who were sued for $54 million over a missing pair of pants have closed shop and sold the business, their attorney said Wednesday.

The South Korean immigrants are citing a loss of revenue and the emotional strain of defending the lawsuit.

"This is a truly tragic example of how devastating frivolous litigation can be to the American people and to small businesses," their attorney, Chris Manning, said in a statement.

Soo Chung and her husband Jin Nam Chung spent more than two years in litigation after a former customer at Custom Cleaners alleged they had lost a pair of his pants, then sued for $67 million under the District of Columbia's strict consumer protection act.

Plaintiff Roy L. Pearson, a local administrative law judge, later lowered his demand to $54 million. He said the "Satisfaction Guaranteed" and "Same Day Service" signs that once hung in the shop were misleading and fraudulent.

The case went to trial in June and a D.C. Superior Court judge ruled in favor of the Chungs, awarding Pearson nothing. Pearson is appealing.

The Chungs spent more than $100,000 for the lawsuit, expenses which eventually were paid with help from fundraisers and donations.

When Pearson began fighting with the dry cleaner in 2005, he plastered the neighborhood with signs alleging unfair business practices and encouraging patrons to avoid the store. Even after the trial ended favorably, Manning said, the Chungs lost customers and revenue.

The financial strain and the emotional toll led to the store's closure, Manning said.

Pearson did not respond to an e-mail from The Associated Press seeking comment.

The Chungs have now closed two of their three businesses since the lawsuit began, Manning said. The couple will devote their energy to their remaining business, Happy Cleaners in Northwest Washington.

"It's sad, but what they're trying to do is move on and return to their private lives," Manning said. The family is hoping that the success of Happy Cleaners eventually will help them rebuild their businesses, he said.