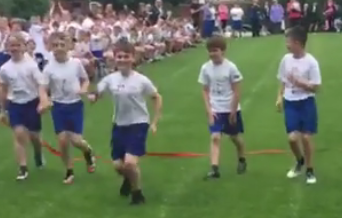 Ten-year-old British boy Daniel Boyers did not want to participate in sports day at his school, but he is sure glad he did.

Boyers, who has cerebral palsy, was worried his classmates might laugh at him if he tried to run on sports day, his mom told Manchester Evening News.

But his friends did quite the opposite.

When the race began, video shows Daniel's classmates running alongside him. And when they are almost to the finish line, the boys slow down to allow Daniel to finish first.

Daniel steps over the finish line, and becomes overwhelmed with joy realizing he won.

According to the Manchester Evening News, Daniel rushed over to him mom, and began crying.

"I am so happy I have come first. I have never done it before," he told her.

The gesture was not only a surprise to Daniel, but to teachers and Daniel's mother, Wendy, too.

Wendy posted the video of the race on Facebook, which has now been viewed more than 14,000 times.

"Daniel LOVES the fact that came first! Super happy boy. Not a dry eye in the house!! thank you xx," she wrote.

Wendy told Manchester Evening News, that Daniel has learning difficulties, so he truly thought he ran a great race.

"He has always run every year, but always comes last," she said.

But this year, Daniel was number one.

"The children that ran the race are absolutely brilliant," Wendy said. "All of the children in the class, everyone, are supportive of him and make sure he is always included."