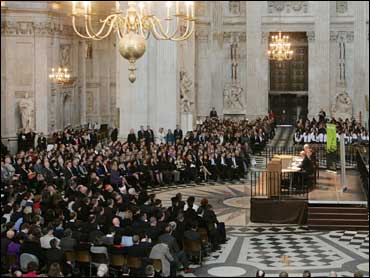 A U.S.-British push for more stimulus spending and widespread European agitation for tougher financial rules amid a global economic crisis will likely get a cool greeting at a G20 summit of receding expectations.

There are signs of discord before the summit has even begun: France's finance minister told the BBC that the nation will walk away from the summit if its demands for stricter financial regulation are not met.

For U.S. President Barack Obama, the stakes were high for his first time on the world stage, both in dealing with the economy and in face-to-face sessions with other leaders.

He was arriving in London on Tuesday night, and planned a round of meetings with leaders on Wednesday, including Queen Elizabeth II, summit host British Prime Minister Gordon Brown and the presidents of Russia and China.

The world economy is in far worse shape than when the group of rich and developing countries last met in November and set lofty goals for international cooperation.

Trade is deteriorating, protectionism is on the march and joblessness is rising. Street demonstrations have increased and widespread protests in London were expected.

Brown, the host, had initially trumpeted the gathering as "a new Bretton Woods - a new financial architecture for the years ahead." But the meeting was shaping up as bearing little similarity to the 1944 conference in New Hampshire where the winners of World War II gathered to set postwar global monetary and financial order.

In their meeting in November, the G-20 members vowed to avoid protectionism that could stifle trade. But since then, 17 have acted to pass subsidies to protect their own industries or limit imports.

There's no clear consensus on a way forward - other than general vows of cooperation, more money for the International Monetary Fund, and a greater voice for rising powers like China and Saudi Arabia.

World Bank President Robert Zoellick called for the G20 to back a $50 billion liquidity fund to keep trade moving. In rich countries, he said, "people talk of bonuses or no bonuses. In parts of Africa, South Asia and Latin America, the struggle is for food or no food."

In fact, giving such economies a regular place at the table for economic summitry may be the one of the few accomplishments of this summit and the one held in November in Washington, recognizing the modern economic realities that countries such as China, India, Brazil and Saudi Arabia have more impact on the world economy now than some of the old victors of World War II.

The leaders were mindful of the importance of appearing united, even if such statements papered over underlying disagreements.

"You've got all world leaders very cognizant of the fact that any open disruptions or disagreements could shake markets and shake confidence in the way going forward," said Steven Shrage, a former U.S. trade official who is an international business analyst with the Washington-based Center for Strategic and International Studies.

London does not have a good history for successful economic summits. One held in London in 1933 failed to do much of anything to halt a global international depression - and may have actually led to more self-protective trade measures.

Still, leaders were upbeat in statements Tuesday as they headed to London.

"It is important and necessary for the summit to take credible decisions which will help to halt and reverse the current slowdown and to instill a sense of confidence in the global economy," said Indian Prime Minister Manmohan Singh as he headed to London.

Summit partners will meet for dinner on Wednesday evening, then hold a business meeting on Thursday.

It seemed likely major new declarations or initiatives would be subject to watering-down conditions at this summit.

U.S. officials, for instance, backed away from pressing too hard to urge for other nations to do far more stimulus spending.

A draft of the communique circulating ahead of the meeting suggested that global leaders will embrace stimulus spending totaling about $2 trillion. But that includes a number of measures already announced.

Leaders of European countries, led by Germany's Angela Merkel, continued to resist calls for more stimulus and for printing money as the U.S. Federal Reserve and the Bank of England have done to try to jump-start a recovery.

Memories of the hyperinflation in the 1920s in Germany that gave way to the rise of Adolf Hitler's Nazi party still haunt modern-day Germany.

"International policy is, for all the friendship and commonality, always about representing the interests of one's own country," Merkel said in a pre-summit interview with The New York Times.

Merkel first met Obama when he traveled to Europe on a campaign trip last summer, a trip in which he was met by thronging crowds, but at a time when the economic world order seemed a lot simpler.

But that didn't go as far as some European leaders had hoped.

On Wednesday, Obama will have separate meetings with Brown, Russian President Dmitry Medvedev, and with Chinese President Hu Jintao.

With Moscow, the agenda will include disputes over energy and Russia's continued opposition to U.S. missile defense sites in Eastern Europe. Obama has indicated less enthusiasm for the missile system than his predecessor, raising hopeful expectations in Moscow. But Russian leaders have engaged in tough talk lately in terms regaining their own status in the world, posing an early test for Obama.

Obama's meeting with Hu is likely to touch on recent Chinese concern about the safety of its vast holdings in U.S. Treasury bonds given dollar-eroding U.S. stimulus programs. China surpassed Japan last year as the largest holder of U.S. debt, and any Chinese flight away from those investments would rock global markets.