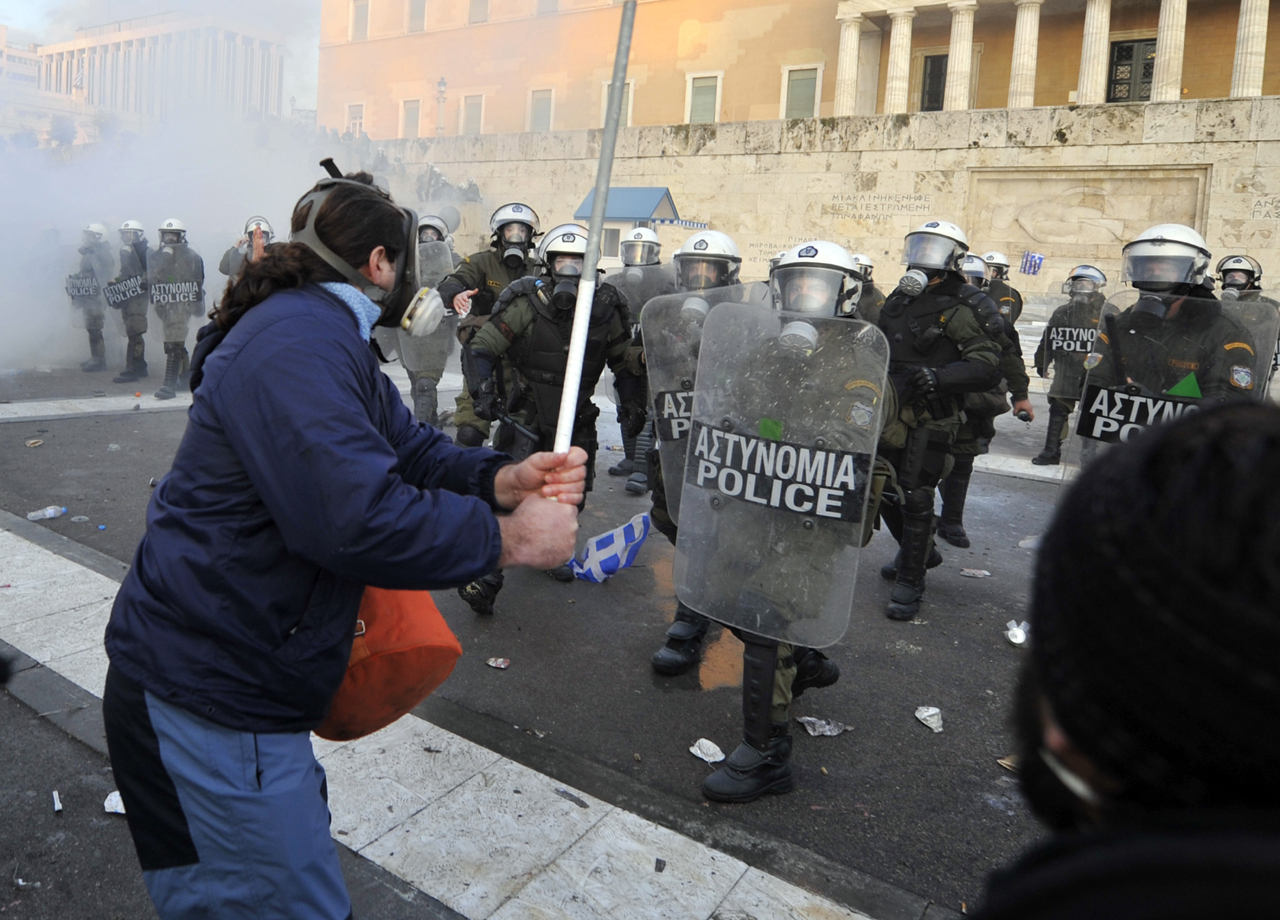 ATHENS, Greece - Fireballs lit up the night sky in Greece's capital as buildings were set ablaze late Sunday amid widespread rioting and looting before a historic parliamentary vote expected to approve harsh austerity measures demanded to keep the country from going bankrupt and within the eurozone.

At least 10 buildings, including a closed cinema, a bank, a mobile phone dealership, a glassware store and a cafeteria, were on fire. There were no immediate reports of people trapped inside. Dozens of shops were also looted in the worst damage the country has seen since unrest in December 2008 following the fatal police shooting of a teenager.

Dozens of police officers and at least 37 protesters were injured in Sunday's violence, and more than 20 suspected rioters were detained. Clashes erupted after more than 100,000 protesters marched to parliament to rally against drastic austerity cuts that will ax one in five civil service jobs and slash the minimum wage by more than a fifth.

Since May 2010, Greece has survived on a euro110 billion ($145 billion) bailout from its European partners and the International Monetary Fund. When that proved insufficient, a new rescue loan package worth a further euro130 billion ($171 billion) was decided -- combined with a massive bond swap deal that will write off half the country's privately held debt.

But for both deals to materialize, Greece has to persuade its deeply skeptical creditors that it has the will and ability to implement spending cuts and public sector reforms that will end years of fiscal profligacy and tame gaping budget deficits.

A three-story corner building was completely consumed by flames with riot officers looking on from the street, and firefighters trying to douse the blaze. Protesters set bonfires in front of parliament and dozens of riot police formed lines to try to deter them from trying to make a run on parliament. Clouds of tear gas drifted across the square in front of parliament. Many in the crowd wore gas masks and had their faces covered, while others carried Greek flags and carried banners.

Riot police fired dozens of tear gas volleys at rioting youths, who attacked them with firebombs, fireworks and chunks of marble smashed off the fronts of luxury hotels, banks and department stores.

Streets were strewn with stones, smashed glass and burnt wreckage, while terrified passers-by sought refuge in hotel lounges and cafeterias.

Prime Minister Lucas Papademos' government -- an unlikely coalition of the majority Socialists and their main foes, the conservative New Democracy -- was expected to carry the vote, even by a narrow margin.

Combined, they control 236 of Parliament's 300 seats, although at least 20 lawmakers from both main parties said they would not back the new private sector wage cuts, pension reductions and civil service layoffs dictated by the draft austerity program.

"There are very few such moments in the history of a nation," Finance Minister Evangelos Venizelos said. "Our country has an acute issue of survival."

"The question is not whether some salaries and pensions will be curtailed, but whether we will be able to pay even these reduced wages and pensions," he added. "When you have to choose between bad and worse, you will pick what is bad to avoid what is worse."

The new cutbacks, which follow two years of harsh income losses and tax hikes -- amid a deep recession and record high unemployment -- have been demanded by Greece's bailout creditors in return for a new batch of vital rescue loans.

"By Wednesday, finance ministers from eurozone countries must finally approve the financing and support program for Greece," Venizelos said. "If that does not happen, and it is not at all certain that it will happen unless we raise to the occasion, then we will not be able by Friday, Feb. 17, to officially start the bond exchange process."

"By midnight today, before markets open, parliament must send the message that our nation is both willing and able," Venizelos aid. "Unfortunately, the markets have subjugated states."

German Finance Minister Wolfgang Schaeuble was quoted as telling the Welt am Sonntag newspaper Sunday that Greece "cannot be a bottomless pit."

"That's why the Greeks must finally put a bottom in," he added. "Then we can put something in too."

Highlighting previous promises he said weren't kept, Schaeuble said "that is why Greece's promises aren't enough for us any more," according to the report.

Asked whether Greece has a long-term future in the eurozone, Germany's vice chancellor told ARD television "that is now in the hands of the Greeks alone."

Philipp Roesler said in the interview broadcast that what matters is not just Greece making pledges.

"We want ... the Greek parliament also to approve laws and, as far as possible, take the first steps to implement what has been agreed," he said.

"Only when that happens, only then can there be new aid -- and Greece urgently needs that," said Roesler, who is also Germany's economy minister.

Roesler acknowledged that Greece faces "difficult decisions" but stressed that Germany wants it to be able to get out of trouble.

"It is not enough just to give financial aid -- they must tackle the second cause of the crisis, the lack of economic competitiveness," he said. "For that, they need ... massive structural reforms. Otherwise Greece will not get out of the crisis."

Introducing the legislation Sunday, Socialist lawmaker Sofia Yiannaka said the intense pressure from Greece's EU partners to pass the measures was the result of delays in implementing already agreed reforms.

"The delays have our imprint. We should not blame foreigners for them," she said.

"We have finally found out that you have to pay back what you have borrowed ... We used to say 'poor state, but rich citizens' because we tolerated tax evasion for populist reasons. Is this the country we want?" Yiannaka added.

Leftist parties and the small rightist LAOS -- a former junior coalition partner -- have vowed to vote against the new austerity.

"You are not trying to save Greece, but a handful of industrialists," Communist Party spokesman Thanassis Pafilis said. "And you disgracefully blame the struggling people who created the wealth we have. You are trying to send them back to the Middle Ages. We will not allow it."