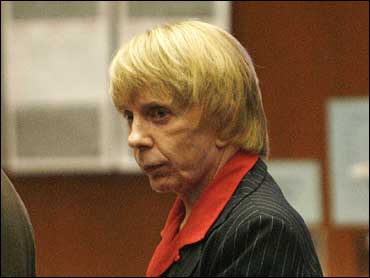 The judge in Phil Spector's murder trial rejected an attempt by his lawyers to introduce writings by the woman he is accused of killing about living in a home where an actress committed suicide in the 1930s.

Letters and e-mails written by Lana Clarkson say she was "at the end of my rope" and expressed despondency about her acting career.

Spector's defense team alleges she killed herself, and used her e-mails and letters Monday in cross-examining a deputy medical examiner, Dr. Louis Pena, about his finding that Clarkson's death from a gunshot fired in her mouth was a homicide.

Testimony was expected Tuesday from a sheriff's crime scene investigator who was at Spector's mansion shortly after Clarkson's body was found.

Pena said he did not see most of the material, but that it would not have changed his opinion.

Clarkson, an actress best known for her role in Roger Corman's 1985 cult classic "Barbarian Queen," was 40 when she died in Spector's foyer after going home with him on Feb. 3, 2003.

Letters and medical records indicated she was plagued by constant headaches and for a time could not function because of them. She had also been on strong prescription narcotic medications but in her later communications said she had discontinued them and had stopped drinking.

She also wrote at one point, "This has been definitely the most difficult year of my life. My finances are a shambles and I am on the verge of losing everything."

Prosecutor Alan Jackson read the entirety of the letters and e-mails, saying they needed to be placed in context.

"I really feel like I'm losing it. I'm kind of feeling like giving up the dream and therefore the struggle," said one letter.

Jackson asked Pena whether that sounded like an actress contemplating giving up career goals, rather than suicide.

Questioning Pena, the prosecutor sought to show jurors that Clarkson had a positive outlook before her death. In January 2003, Clarkson had been hired for an infomercial, she provided her agent with new information about herself to submit for TV pilots and she was supposed to be the master of ceremonies for a House of Blues employee party on Feb. 4, 2003.

Spector, 67, the producer who rose to fame with the hit-making "Wall of Sound" recording technique in the 1960s, is accused of murdering Clarkson, whose body was found slumped in a chair in the foyer of his mansion.

Clarkson had met him for the first time at her job as a hostess in a VIP room at the House of Blues on the Sunset Strip.