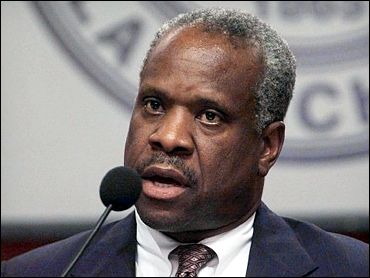 (AP)
Supreme Court Justice Clarence Thomas this week opened up to college students about why he chose to skip President Obama's State of the Union address last week and why he ruled with the majority of the Court in the recent, controversial Citizens United case.

As a judge, Thomas told students at Stetson University College of Law in Gulfport, Fla., that he preferred to stay out of the political theater of the State of the Union.

"I don't go because it has become so partisan and it's very uncomfortable for a judge to sit there," he said, according to the New York Times. "There's a lot that you don't hear on TV — the catcalls, the whooping and hollering and under-the-breath comments."

"One of the consequences," Thomas said, "is now the court becomes part of the conversation, if you want to call it that, in the speeches. It's just an example of why I don't go."

Continuing with that logic, he said, "But what if you put yourself in a corporate form?"

Speaking later at the University of Florida law school, Thomas said the Court's decisions should be questioned, but he is bothered by rhetoric suggesting its justices have ulterior motives, the Associated Press reports.

"There are different approaches, because we start with different assumptions. Or we look at things differently," he reportedly said. "And I think law school should encourage you that these differences are acceptable in our legal system. And in the end, it is what strengthens and informs our legal system."

He added that extreme criticism of the Court and other government branches can "run the risk in our society of undermining institutions that we need to preserve our liberties."