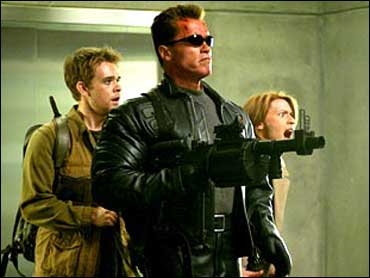 Now Danes, 23, has made a leap from smaller-scale dramas to a much larger-scale action film, finding herself face-to-face with Arnold Schwarzenegger in "Terminator 3." She discussed her move with The Early Show co-anchor Julie Chen.

In the movie, Kate Miller (Danes) is on the run to escape from an evil female terminator (Kristanna Loken), but instead gets thrown out of a truck.

Although Danes flies high in her action-packed "Terminator 3" scenes, she says she won the part by the hair on her chin. "I was actually hired for this, literally, the day before I started working on it," Danes says.

Danes explains that actress Sophia Bush, who appeared in the movie "Van Wilder," was originally cast for the part of Kate.

"She hadn't done all that much work before she started working on this project," Danes adds. "I think, in the end, she was just a bit too young for the role."

The ball started rolling when Danes received a call from her agent. She says her agent explained, "There's been a crisis on the 'Terminator 3' set and they need to recast the female lead, and they'd like you to step up to the plate immediately."

Audiences were first captivated by Danes' work almost a decade ago, in the highly respected television drama "My So-Called Life." That lead to leading roles in "Romeo + Juliet" opposite Leonardo DiCaprio, "The Rainmaker" with Matt Damon, and "The Hours" with Meryl Streep. For Danes, critics say appearing in the big budget action sequel will be easy as 1, 2, "Terminator 3."

She says taking on the terminator is a far cry from anything she's done before.

"I understand people don't generally associate me with the action genre," she says. "I sincerely loved the first two 'Terminator' movies ... I think they're really clever, and were so technologically innovative."

Though, she was only 4 when the first 'Terminator' movie was released, Danes said she saw the sequel and was overwhelmed by its sophistication.

However, while Danes agreed to do a "Terminator" movie in her 20s, she might have turned down the chance to act in the movie franchise at another time in her life.

As a pre-teen, she turned down a role with the daytime soap opera "One Life To Live," because, Danes says, she didn't want her acting style to be tainted. She says it was her own decision, not her mother's.

"I had seen soap operas before and I knew that they acted in quite a stylized way," she says. "And being unformed as an actor, I knew I was still very impressionable.And I didn't want to develop any bad habits."

So while she's never done a soap opera, Danes now has the artistic freedom to be young, restless, bold and beautiful.

Some Facts About Claire Danes: