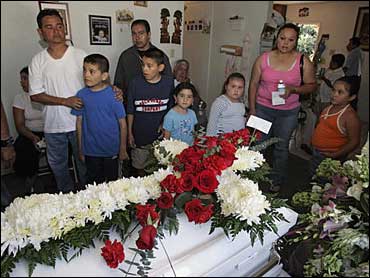 Relatives of a toddler killed by police during a shootout with the child's father have filed claims against the city and the police department, their attorney said.

The claims, which were filed late Monday and accuse police of negligence, are a precursor to a civil lawsuit.

Suzie Marie Pena, aged 19 months, was killed by a police bullet as officers exchanged fire with her father, Jose Raul Pena, on July 10.

The 2½-hour shootout started when Pena barricaded himself inside his Watts auto dealership and fired numerous rounds at officers and toward neighboring homes and businesses while using Suzie as a shield, police have said.

Attorney Leo Carrillo, who is representing Suzie Pena's family, accused police on Monday of not giving negotiators enough time to try to talk the father into surrendering. He also accused officers of recklessly using a flash-bang grenade.

The incident is being investigated.