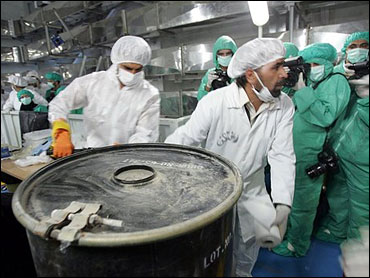 Alireza Jafarzadeh told The Associated Press the centrifuges — which he said are unknown to the U.N. nuclear watchdog agency — are ready to be installed at Iran's nuclear facility in Natanz.

None of Jafarzadeh's claims could be independently verified immediately.

Meanwhile, diplomats gathered Tuesday for an emergency meeting of the U.N. nuclear agency to assess Iran's resumption of uranium conversion, but the agency appeared unlikely to report Tehran to the U.N. Security Council.

Iran on Monday restarted some uranium conversion activities at its nuclear plant at Isfahan after suspending them in November following an agreement with Britain, France and Germany and appeals by the Vienna-based International Atomic Energy Agency.

The three European Union countries have been negotiating with Iran in an attempt to persuade the country to drop its uranium enrichment program and related activities in return for incentives. Their latest offer was rejected last weekend by Tehran.

The three EU countries called Tuesday's emergency meeting of the IAEA's board of governors after Tehran announced plans to resume conversion, the process preceding enrichment. Highly enriched uranium can be used to make weapons; uranium enriched to lower levels is used to produce electricity.

Iran insists its nuclear program is peaceful, but Washington accuses Tehran of covertly trying to build an atomic weapon.

The 35-nation IAEA board could report Iran to the Security Council, which in turn could impose economic or political sanctions. However, a Western diplomat close to the agency said it did not appear that the board was ready to take that step.

Jafarzadeh, the source of the new claims who runs Strategic Policy Consulting, a Washington-based think tank focusing on Iran and Iraq, said the information — which he described as "very recent" — came from sources within the Tehran regime who have proven accurate in the past.

The IAEA did not immediately comment on the centrifuge allegations. The agency previously had said it was aware of the existence of 164 centrifuges at Natanz, 300 miles south of Tehran.

Iran also did not immediately comment on the Jafarzadeh's claims.

Under an agreement with the IAEA, Iran had pledged to stop building centrifuges, which can be used to enrich uranium to levels high enough to fuel a nuclear weapon.

Centrifuges also can be used for the peaceful generation of nuclear energy, which Iran insists is its only intention. The United States contends the country is running a covert effort to produce nuclear weapons.

"These 4,000 centrifuge machines have not been declared to the IAEA, and the regime has kept the production of these machines hidden from the inspectors while the negotiations with the European Union have been going on over the past 21 months," Jafarzadeh said in a telephone interview.

Iran on Saturday rejected a package of EU incentives presented by envoys from Britain, France and Germany, and on Monday, it announced it had resumed uranium conversion activities at its nuclear facility at Isfahan.

Jafarzadeh said the centrifuges were manufactured in Isfahan and Tehran, and that construction of buildings, concrete foundations and other work needed to prepare the Natanz facility for centrifuge installation has continued in recent months.

The board, however, appeared unlikely to report Iran to the U.N. Security Council, which has the authority to impose economic or political sanctions on the regime.

Officials in Washington would not directly answer questions about whether the United States intends to push for sanctions now. State Department spokesman Adam Ereli did say that Iran was "thumbing its nose at a productive approach."

U.N. Secretary-General Kofi Annan spoke Monday to the newly elected president of Iran, Mahmoud Ahmadinejad, about the country's nuclear program and the negotiations with the three EU nations and "urged restraint and encouraged the continuation of the ongoing process," U.N. spokesman Stephane Dujarric said at U.N. headquarters in New York.

"He hopes both sides will remain engaged in search for an acceptable solution," Dujarric said.

Daryl Kimball, executive director of the Washington-based Arms Control Association, said he thought that "the board should act by making clear that if Iran does not suspend these activities within days or a couple of weeks, they will meet again and refer the case to the Security Council."

Sending Tehran's file there now would have little effect and could even be counterproductive, Kimball said.

"The nationalist push for the Iranian nuclear program may only increase if the case is referred to the Security Council at this point," he said. "It would be unwise not to give Iran the opportunity to change its mind."

But David Albright, a former U.N. nuclear inspector who now runs the Institute for Science and International Security in Washington, argued that Iran's violation of the agreement with the EU countries left them with no choice but to pursue a referral to the Security Council.

Jafarzadeh said Iran was making "extensive" use of front organizations or companies for the production and testing of centrifuge parts. He identified the companies as Pars Tarash, Kala Electric and Energy Novin, and said all had office space in the downtown Tehran building that houses Iran's Atomic Energy Organization.

In 2002, Jafarzadeh — then a member of the National Council of Resistance of Iran, an exiled opposition group — disclosed information about two hidden nuclear sites that helped uncover nearly two decades of covert Iranian atomic activity and sparked present fears that Tehran wants to build a bomb.

In June 2004, diplomats told AP in Vienna that Iran had acknowledged inquiring about 4,000 magnets needed for uranium enrichment equipment with a European black-market supplier and had dangled the possibility of buying a "higher number." It was unclear whether the magnets were intended for use in the 4,000 centrifuges Jafarzadeh cited.

A month later, in July 2004, Iran confirmed it had resumed building centrifuges, although it said it had not restarted uranium enrichment.