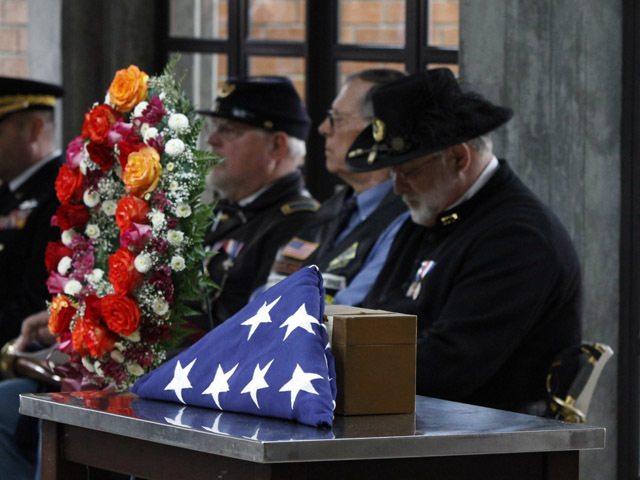 (AP) PORTLAND, Ore. - A Civil War veteran whose ashes sat for decades forgotten in storage could someday be remembered as the final soldier buried from that war.

Peter Jones Knapp, who fought for the Union in many famous battles and survived the dreaded Andersonville prison camp in Georgia, was laid to rest Friday afternoon in Willamette National Cemetery, the first Civil War veteran to be buried in Oregon's largest military graveyard.

Knapp, whose cremated remains were discovered by a woman tracing her husband's family tree, received full military honors from the Oregon National Guard on the anniversary of his 1924 death. The funeral also fell on the 151st anniversary of the Confederate victory at Fort Sumter, S.C., which ignited the Civil War.

The burial attracted a mix of veterans, historians, Civil War re-enactors and people simply curious. The 19th and 21st centuries collided as cellphone and video cameras recorded men and women dressed as Union soldiers and civilians. There was not a Confederate in sight. Brigadier General Eric C. Bush of the Oregon National Guard was among the speakers who addressed the audience.

"It has definitely become a bigger thing than we could have ever imagined," said Ruth Knapp-Vallejos, 52, of Alameda, Calif., whose grandfather was Peter Knapp's nephew. "Usually our family funerals are very small affairs."

It was Ruth's sister-and-law, Alice Knapp of Nehalem, Ore., who discovered the ashes, with the unwitting help of an Oregon newspaper.

Alice Knapp, who enjoys genealogy, was investigating her husband's roots when she learned of a 2009 article featuring Peter Knapp in the Medford Mail-Tribune newspaper. The story by Bill Miller looked back at a news item from 1921 in which a Confederate veteran named Willis Meadows literally coughed up a bullet during a violent spasm.

Meadows was shot in the eye during the war and the bullet remained near his brain until it flew from his mouth almost 60 years later. Peter Knapp, by this time an old man in Kelso, Wash., read details from an article that made national news in 1921 and concluded he was the soldier who shot Meadows at Vicksburg, Miss.

He sent a letter to the one-eyed Meadows and the two connected.

"As young mortal enemies they had tried to kill each other, but now, as aging veterans, they would spend their last few years as friends, exchanging photographs and wishing each other good health," Miller wrote.

After reading the Mail Tribune article, Alice Knapp wanted to know where Peter Knapp was buried. She found his obituary from the Kelsonian newspaper, which said final services had been held at a Portland crematorium.

She made a few calls and was stunned to hear that Peter Knapp's ashes were sitting on a storage shelf, unclaimed. She later inquired about Knapp's wife, Georgianna, who died in 1930. She was there, too.

"I felt the ashes had to be buried or at least scattered somewhere," said Alice Knapp. "Not sitting in some storage locker."

The reason why nobody ever scattered or buried the ashes at the time has probably been lost to history. A family friend, Debbie Peevyhouse of the California Medal of Honor Project, arranged to have them placed in the national cemetery.

The hearse carrying the twin gold boxes containing the ashes arrived on a road lined with Patriot Riders holding American flags. The speakers largely focused on what Peter Knapp endured as a soldier, his incredible reunion with the man he shot and his commitment to his wife of more than 53 years.

"May we all be inspired by his example of loyalty and fidelity," said D.H. Shearer, an Oregon pastor who, on this day, was a Union chaplain.

The Sons of the Union Veterans of the Civil War performed a ritual for the dead based on a Grand Army of the Republic ceremony from 1873. The funeral also included a bagpiper playing "Amazing Grace," a bugler who performing "Taps," and the laying of wreaths. Following a musket salute, a folded U.S. flag was presented to Alice Knapp.

According to his 1924 obituary, Peter Knapp enlisted with Company H, 5th Infantry, Iowa Volunteers, in July 1861 and fought in numerous battles, including Iuka, Shiloh and Vicksburg. He was taken prisoner at the battle of Missionary Ridge and sent to Andersonville, where almost 13,000 Union soldiers died.

He married Georgianna Pearson in Muskegon, Mich., in 1870 and moved to Washington state in 1887. He was elected justice of the peace after his retirement from the sawmill business.

Much less is known about his wife.

"The veterans in the world know your wife or your spouse is a companion that really helps you make the adjustment back to the world," Ruth Knapp said. "I'm sure there was more than one night when he woke up screaming, and she would have had to have been there to soothe him. I would think she was a very important reason he was able to keep it together."