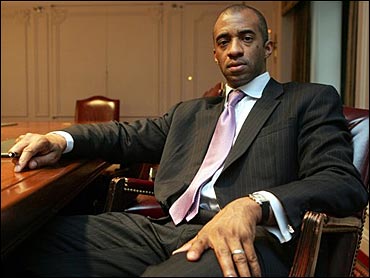 Forty years after the passage of the 1965 Voting Rights Act and decades after the Rev. Martin Luther King Jr. made strides in racial equality, America remains split along racial lines — divided by the color green.

Fewer blacks than whites own their houses, get fair loans, invest in the stock market or sit on corporate boards, or have any real control over much of the trillions of dollars flowing in mutual funds, pension plans and the financial markets, they said.

"Very real gains have been made on some parts of the economic front and the education front and most particularly on the job front," said Thomas Shapiro, professor at the Heller School for Social Policy and Management at Brandeis University. "(But) those gains are being reversed through widening racial wealth gaps."

There is a difference between income and wealth, which the latter includes investments in stocks or pension plans, equity from paying a mortgage, and assets that can be used to pay for education or retirement.

And wealth is where the biggest differences persist.

The disparity was even starker across all income groups — black families as a whole had only 10 cents in wealth for every dollar white families had, according to government figures.

There are historical reasons — generations of poverty, a legacy of slavery and laws that kept them from education, housing and good jobs. But advocates say there also is persistent discrimination in mortgages and other loans.

"The biggest problem is that we've been choked off to a large degree from capital," said Shawn Baldwin, 38, who recently started his own brokerage and asset management firm with the help of the Rev. Jesse Jackson, who introduced him to executives at Citibank.

According to the Center for Responsible Lending, less than half of black households own their homes, while 75 percent of white households do. Home equity is the leading source of wealth for most Americans.

"If you don't have any equity, you don't control anything," said Keith Corbett, senior vice president with the center.

Melvin Oliver, dean of the Division of Social Sciences at the University of California at Santa Clara, said there has been progress in helping blacks increase homeownership, but "that progress has mainly been because banks have had to legally meet community investing requirements."

Blacks lag in stock market investments, as well. In 1998, 57 percent of blacks making at least $50,000 a year invested, compared to 81 percent of whites, said Mellody Hobson, president of Ariel Capital Management, a minority-owned firm in Chicago.

During the stock market boom, the percentage of black investors shot up — 74 percent in 2002 — but had dropped to 64 percent by 2003. Meanwhile, white investment stayed roughly the same.

"Whites sort of pared back some of their equity investments but they didn't sell out of them completely. We ran for the door," Hobson said, attributing it to fear and a lack of experience with the stock market and its cycles.

Jackson points out that while minorities put money into mutual funds and pension plans, they are scarcely to be found among the decision makers who determine how those funds and plans are invested. His Rainbow/PUSH organization has called for more diversity on Wall Street, among money managers and board members.

"They should be invested in the people's interest," he said.

Corbett worried about forcing people into a "permanent underclass."

"When people do not have access," he said, "you're leaving those people out of the system."