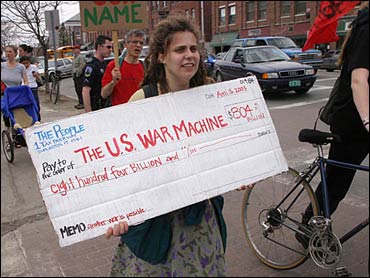 Thousands of Americans chose not to pay their federal income tax this year as a political statement, many because they don't want their money supporting the U.S. military.

It's a form of civil disobedience some peace activists say is especially important this filing season because of the war in Iraq. But the tax man doesn't care what their reasons are.

The Internal Revenue Service doesn't treat political protesters differently from Americans who fail to file their tax returns due to neglect or greed. It says not paying can result in long-term financial consequences, including a damaged credit history.

"People need to be aware if you don't file your tax return or pay your taxes on time, you could face penalties or interest, and if you continue to ignore it, the penalties and interest could increase," said IRS spokeswoman Peggy Riley.

The National War Tax Resistance Coordinating Committee estimates as many as 8,000 Americans each year avoid paying some or all of their federal income tax liability because of their political beliefs. An estimated 132 million returns are expected to be filed this year.

Eleanor Bonney Simons, 83, of St. Johnsbury, hasn't paid federal income taxes or the federal tax portion of her telephone bills in a decade, and said she always makes sure to give away enough money each year that she doesn't have any tax liability.

"I find I can live very well this way," Simons said. "It makes me feel good to know I'm not supporting the war effort."

War tax resisters say they've received more inquiries about the movement this spring because of the war in Iraq. And some used Tuesday as an occasion to share their beliefs.

In downtown St. Louis, about two dozen people staged a tax protest outside a federal building, handing out a photo of a wounded Iraqi child superimposed over tax forms.

"It's a hard decision. I'm an upstanding citizen. I follow the rules," said Tom Makarewicz, 42. He and his wife, Suzanne, filled out a federal tax form with the correct amount owed, but sent the government a letter saying they couldn't, in good conscience, turn over $300 of it because they believed it would support the military.

Instead, they donated the money to a fund that pays for social causes they support. They also tried to deliver medical supplies for wounded Iraqis instead of taxes, which they said the IRS politely refused.

"We're always concerned if somebody is not going to pay their taxes," said Riley, the IRS spokeswoman. "However, we don't see this as a major problem for this filing season."

"For me it's a spiritual decision and for people who aren't comfortable with that language, it's a deep, long-term decision and I think people should really think long and hard before doing it," she said.

Many tax resisters like the Makarewiczs calculate the money they owe the government and then donate it to charity instead. Some stay in touch through newsletters or local groups as a form of community.

"The thing is about war tax resistance, it's a solitary thing," Loehr explained. "You're home alone when you get that letter from the IRS and that can feel intimidating."

For Bob Bady, 50, of Brattleboro, the decision to become a war tax resister dates back to the Vietnam war. He opposed the draft and later chose to not pay taxes as another form of expressing his anti-war beliefs.

He quit his job as a registered nurse because his wages were going to be garnished by the government, and the IRS seized his house in 1989. He is currently self-employed.

"By not paying taxes, I'm forgoing the middle class securities that I might have had, so why am I doing this?" he asked. "What's more important, to do what's right or to be comfortable?"