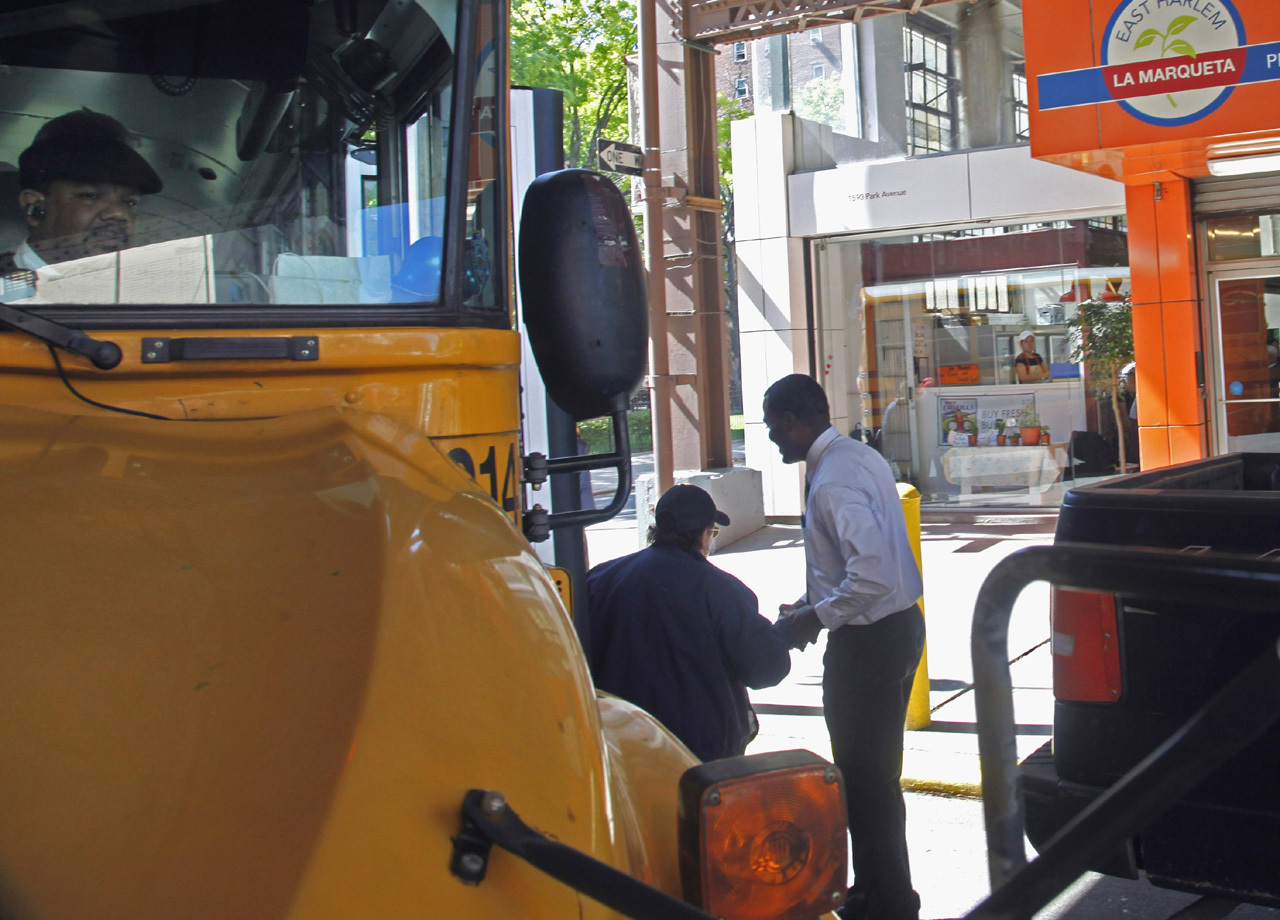 NEW YORK — America's cities are beginning to grapple with a fact of life: People are getting old, fast, and they're doing it in communities designed for the sprightly.

To envision how this silver tsunami will challenge a youth-oriented society, just consider that seniors soon will outnumber schoolchildren in hip, fast-paced New York City.

It will take some creative steps to make New York and other cities age-friendly enough to help the coming crush of older adults stay active and independent in their own homes.

"It's about changing the way we think about the way we're growing old in our community," said New York Deputy Mayor Linda Gibbs. "The phrase 'end of life' does not apply anymore."

Many boomers not prepared for elder care: Survey
Drug, alcohol problems spike in seniors
Boomers are rewriting the rules for retirement

But it is not alone.

Atlanta, Georgia, is creating what it calls "lifelong communities." Philadelphia, Pennsylvania, is testing whether living in a truly walkable community really makes older adults healthier. In Portland, Oregon, there is a push to fit senior concerns such as accessible housing into the city's new planning and zoning policies.

Such work is getting a late start considering how long demographers have warned that the population is about to get a lot grayer.

"It's shocking how far behind we are, especially when you think about this fact: that if you make something age-friendly, that means it is going to be friendly for people of all ages, not just older adults," said Margaret Neal of Portland State University's Institute on Aging.

While this fledgling movement is being driven by nonprofit and governmental programs, New York aims to get private businesses to ante up, too.

Last year, East Harlem became the city's first "aging improvement district." Sixty stores, identified with window signs, agreed to put out folding chairs to let older customers rest as they do their errands. The stores also try to keep aisles free of tripping hazards and use larger type so signs are easier to read. A community pool set aside senior-only hours so older swimmers could get in their laps without faster kids and teens in the way.

On one long block, accountant Henry Calderon welcomes older passers-by to rest in his air-conditioned lobby even if they are not customers. They might be, one day.

The size of the aging boom is staggering. Every day for the next few decades, thousands of baby boomers will turn 65. That is in addition to the oldest-old, the 85- to 90-somethings whose numbers have grown by nearly one-third in the past decade, with no signs of slowing.

That is almost always viewed as a health issue, preparing for the coming wave of Alzheimer's, or as a political liability, meaning how soon will the government's Social Security pension program go bust?

"We think this is something we should be celebrating," says Dr. John Beard, who oversees the World Health Organization's Global Network of Age-Friendly Cities. "They need to live in an environment that allows them to participate."

In East Harlem, a yellow school bus pulls up to a curb and 69-year-old Jenny Rodriguez climbs off. The bus already had dropped a load of kids at school. Now, before the afternoon trip home, it is shuttling older adults to a market where they flock to fresh fruits and vegetables.

Rodriguez usually goes shopping on foot, pulling along a small cart. It can be a hike. Supermarkets are not common in this lower-income part of the city, and there is less to choose at tiny, pricier corner bodegas.

"You can only buy so much. Some streets, the cracks are so bad, you're pushing the shopping cart and almost go flying," Rodriguez said, examining sweet potatoes that she pronounced fresher and cheaper than at her usual store. "This is so much easier."

More than 200 times, school buses have taken older adults from senior centers to supermarkets in different neighborhoods. It's just one of a variety of initiatives begun in 2009 by the New York Academy of Medicine and the city's government to address the needs of older residents. Already, they're showing results.

A city report found the number of crashes has dropped at busy intersections in senior-heavy communities where traffic signals now allow pedestrians a few more seconds to cross the street.

Benches have been placed in nearly 2,700 bus shelters to give waiting seniors a place to rest.

The city's aging taxi fleet is scheduled to be replaced by a boxier model designed to be easier for older riders and people with disabilities to open the doors and slide in and out.

On the Upper West Side, seniors snapped up a report card of grocery stores deemed age-friendly because they offer deliveries, have public bathrooms — a rarity in the city — and sell single portions of fresh meat, poultry or fish, important for people who live alone.

Artists volunteer to teach at senior centers in return for space to work on or display their own creations.

And a "Time Bank" is letting hundreds of people of different ages and with different skills essentially barter services. A retired English teacher may do some tutoring, for example, and use the credit she earns to get computer help from another volunteer.

Aging expert Andrew Scharlach of the University of California, Berkeley, sees a common thread in these changes and the work of other cities. Combat the social isolation that too easily sneaks up on older adults, and it has a huge impact not just on how many years they will live, but how well they will live them.

Cities and suburbs were designed for younger people, full of stairs and cars, he explained. As they become increasingly difficult to navigate, older people gradually retreat.

Revamping a lot of infrastructure may not happen in a tough economy. But some communities are building age-friendly changes into planned upgrades or maintenance, such as New York's street crossings, or into requirements for future development.

The World Health Organization's Beard says some changes are not that costly. He notes that seniors around the world say more benches and access to bathrooms will help them get out and about.

Among other U.S. cities' work:

The Atlanta Housing Authority is working with the commission to retrofit high-rise apartments that house a lot of older residents, with the goal to improve access to the surrounding community. At one site under construction, changes include a ramp entrance, safer sidewalk to the bus stop and more time for pedestrians to cross the street.

Above: A resident of the Marion Apartments in Atlanta makes use of a newly-constructed ramp, built to accommodate the city's aging population. (AP Photo/David Goldman)

The overall movement is not without controversy.

She said boomers, who are classified as being born from 1946 to 1964, and millenials, the children of baby boomers who came of age in the new millennium, ultimately want the same things: access to shopping, green space, more freedom from the car. The idea is a mix of ages but where older residents do not need to move if their health fails.

Keyes became interested in age-friendly communities when visiting friends in nursing homes built in commercial districts and saw that her friends had nowhere to take a walk.

In redesigning the city's zoning code, proposals are being debated that would allow seniors to rent out their upper floors, and to require that a certain amount of new housing be what is called "visitable," with such amenities as ramp entrances, wide hallways and at least a half-bathroom on the main floor, she said.

With funding from the National Institutes of Health, the aging group's Allen Glicksman is studying whether seniors who live in a walkable neighborhood really are healthier as a result. He has found that social capital — friendly neighbors, low crime and good sidewalks that encourage getting out — is as important to older residents as access to supermarkets, public transportation and good housing.

Also, there are calls for age-friendlier parks, with safer steps and places to walk apart from bikers.

To sustain momentum, Clark created GenPhilly, a network of 20- and 30-somethings interested in shaping the city they will age in by raising senior issues in varying professions.

Now, aging experts are among the advisers as the city develops a master plan for the next 25 years. One issue, Neal said, is how to develop more accessible housing when the city's anti-sprawl policy means a lot of narrow, multistory houses are being squeezed into empty city lots, near transportation but still not age-friendly with all the stairs.

Integrating senior-friendly changes into everyday city policies is less visible than, say, a new retirement home but it is ultimately the goal, says Scharlach, the aging expert.

Consider La Marqueta in New York City's East Harlem district. Fifty years ago, it was a bustling, five-block market, a weekly gathering spot for families. Economic downturn left the city-owned building mostly empty for years. Now, as part of a $1.5 million economic revitalization project, an industrial kitchen in the building will train low-income women to start their own food businesses. It joins the fish and butcher shop, a farmer's market, and a high-end food importer, and busing in the seniors once a month boosts the still thin customer traffic.

Such trips are more than a shopping day. A quick check from a health department nurse reassured 73-year-old Maria Ilarraza that her blood pressure was OK, and she sat to catch up with friends over coffee. In another corner, a crowd listened as a university nutritionist explained how to freeze and thaw meat safely.

Art teacher Piedad Gerena showed off some of the bold landscapes and modern images her students at a nearby senior center learned to paint, and, to her delight, sometimes sell for up to $200 apiece. "Many of these people have no families," Gerena said. "The art makes them feel happy."