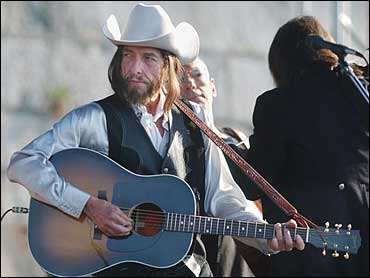 How many roads must a man walk down before Martin Scorsese makes a movie about him?

The answer, my friend, is in the tentatively titled "Bob Dylan Anthology Project," a biography about the iconic folk singer directed by the "Gangs of New York" filmmaker.

The film, planned for release in 2005, will chronicle Dylan's 1963 breakthrough and the cultural and political influence of his music, Scorsese and his producing partners said Tuesday.

"I've admired and enjoyed his many musical transformations," Scorsese said in a statement. "For me, there is no other musical artist who weaves his influences so densely to create something so personal and unique."

The documentary is in the tradition of "The Last Waltz," Scorsese's 1978 concert film about The Band, which also featured Dylan. The Dylan film is expected to feature live concert performances, studio recording sessions and a rare interview with the singer-songwriter.

The Rock and Roll Hall of Fame has described Dylan, who turns 62 Saturday, as "the pre-eminent poet/lyricist and songwriter of his time" for composing such songs as "Like a Rolling Stone," "Blowin' in the Wind" and "Mr. Tambourine Man."

Dylan also acts and sings in the upcoming film "Masked and Anonymous," set to debut July 25.