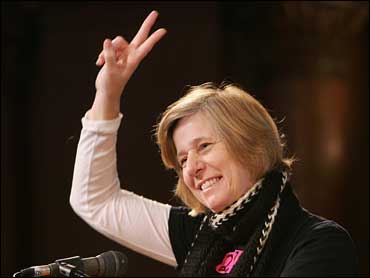 Anti-war activist Cindy Sheehan announced Monday she is giving up her role as the "face" of the American anti-war movement.

"I've been wondering why I'm killing myself and wondering why the Democrats caved in to George Bush," Sheehan told The Associated Press by phone Tuesday while driving from her property in Crawford to the airport, where she planned to return to her native California.

"I'm going home for awhile to try and be normal," she said.

Sheehan, 49, of Vacaville, Calif., lost her 24-year-old son Casey in Iraq on April 4, 2004. She has since emerged as one of the most vocal and high-profile opponents of the war, drawing international attention nearly two years ago when she camped outside President Bush's Crawford, Texas ranch to protest the war.

"I am going to take whatever I have left and go home. I am going to go home and be a mother to my surviving children and try to regain some of what I have lost," Sheehan said.

"I am getting out before it totally consumes me or anymore people that I love and the rest of my resources," she said.

In announcing her decision in a statement released to the liberal blog Daily Kos, Sheehan said the protest had taken an enormous physical and emotional toll on her.

Sheehan said she had sacrificed a 29-year marriage and endured threats to put all her energy into stopping the war.

"I have used all my energy trying to stop this country from slaughtering innocent human beings. I have been called every despicable name that small minds can think of and have had my life threatened many times," Sheehan said.

But she said the most devastating conclusion she had reached "was that Casey did indeed die for nothing ... killed by his own country which is beholden to and run by a war machine that even controls what we think".

Fueling Sheehan's decision to end her public protest was frustration with national politics as well her unsuccessful attempts to work "within a peace movement that often puts personal egos above peace and human life."

"It is hard to work for peace when the very movement that is named after it has so many divisions," Sheehan said.

Cindy Sheehan started her protest small in August 2005, but it quickly drew national attention. Over the following two years, she drew huge crowds as she spoke at protest events, but she also drew a great deal of criticism.

When she had first taken on Mr. Bush, Sheehan was a darling of the liberal left. "However, when I started to hold the Democratic Party to the same standards that I held the Republican Party, support for my cause started to erode and the 'left' started labeling me with the same slurs that the right used," she wrote.

"I guess no one paid attention to me when I said that the issue of peace and people dying for no reason is not a matter of 'right or left', but 'right and wrong,"' the diary says.

Sheehan criticized "blind party loyalty" as a danger, no matter which side it involved, and said the current two-party system is "corrupt" and "rapidly descending into with nary a check or balance: a fascist corporate wasteland."

Sheehan paid for a 5-acre lot about 7 miles from Mr. Bush's ranch last month so protesters would have a place to gather while the president is at his ranch. Last year, she started out camped in ditches along the road leading to Mr. Bush's ranch, until county officials banned roadside parking and camping. A sympathetic landowner then let the group gather on his 1-acre lot near the ranch.

"Camp Casey has served its purpose," Sheehan said. "It's for sale. Anyone want to buy five beautiful acres in Crawford, Texas? I will consider any reasonable offer. I hear George Bush will be moving out soon, too...which makes the property even more valuable."