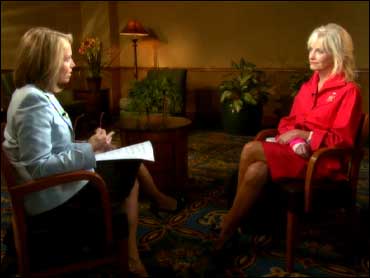 CBS News anchor Katie Couric talked one-on-one with Cindy McCain about her husband's selection of Alaska Gov. Sarah Palin to be his running mate. They also discussed social issues, such as abortion. Couric began by asking McCain if the governor has been rattled by the intense media scrutiny.


Cindy McCain: No, she's not the least bit shell shocked. She's tough, she's smart. She's extremely on target with the job she needs to be doing. No she's a very - she's an amazing woman. She really is. I'm very impressed with her.

Katie Couric: When did you and your husband first discuss her as a possibility?

McCain: A while ago. We had, as you know, John and I pretty much discuss everything. And he brought her name up to me some months ago, after the primaries, of course. And then … as you get a lot of names, I mean we were thinking abut a lot of different people and Sarah was in that mix. I'm very happy he chose a governor, and I couldn't be happier. In fact, when he called me and said "ok, I think I'm going to do this," I was, if I could, I would have done back flips. I'm too old, but I could have.

Couric: Do you feel confident, Mrs. McCain, that the vetting process which is getting a lot of attention was as thorough as it needed to be and that Sen. McCain knew everything he needed to know?

McCain: Well, I was right in the middle of it. I know the vetting process was thorough. I knew that was going on, so absolutely, it was. She was vetted and she was thoroughly vetted. That's, you know, it's just something that, just because the media didn't know, doesn't mean we didn't vet her (laugh).

Couric: The scuttlebutt, if you will, behind the scenes is that Sen. McCain really wanted Joe Lieberman to be his running mate, but social conservatives would have found him unacceptable because of his position on abortion.

McCain: My husband and Joe are very good friends. And, wouldn't it be nice to work with your best friend? Of course. But we had to consider other things as well. And reform being the, as you know, my husband's most important issue, and my husband felt that Gov. Palin was a better fit for that.

Couric: Some, even Republicans, seemed surprised that Sen. McCain picked a running mate who opposes abortion even in the cases of rape and incest, and believes creationism should be taught in schools. And I'm just curious, do you agree with that?

McCain: What I agree with is the fact that she is a social conservative. She is a reform-minded woman. She is someone that will … shake Washington up, which is exactly what we want to do. We differ on many issues; we differ across the board with people. We don't have to agree on every issue.

Couric: Where do you stand on abortion?

McCain: I'm pro-life. I'm on the record as being pro-life, like my husband.

Couric: So do you oppose it even in cases of rape and incest?

Couric: So that's where you two differ in terms of your position on that.

Couric: And do you believe Roe V. Wade should be overturned?

Couric: No. Why not? Your husband does.

McCain: No. I don't think he does.

Couric: He believes it should be overturned. That's what he told me, and that it should go to the states.

McCain: Well, in that respect. Yes, yeah, I do. I understand what you're saying now. It's a states issue.

McCain: I believe it's a states issue. That I do believe.

Couric: How do you feel about creationism? Do you think it should be taught in schools?

McCain: I think both sides should be taught in schools. I think the more children have a frame of reference and an opportunity to read and know and make better decisions and judgments when they are adults. So, I think you know I don't have any problem with education of any kind.