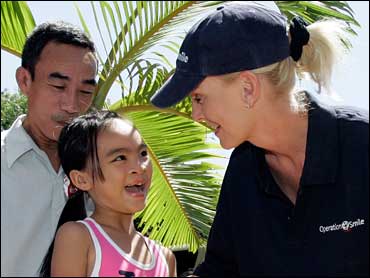 "It's just a terrible group of people that rule the country, and the frightening part is that their own people are dying of disease and starvation and everything else and it doesn't matter," Cindy McCain said during a trip to Vietnam, where she has worked with a charity that helps children born with facial deformities. "I don't understand how human life doesn't matter to somebody. But clearly, it doesn't matter to them."

She was traveling in Asia this week to showcase her charity work and get a close-up look at relief efforts helping victims of last month's devastating cyclone in Myanmar, otherwise known as Burma.

She said she didn't even bother trying to get an entry visa to Myanmar, knowing it would likely be denied by the secretive government. Instead, the U.N. World Food Program in Thailand will brief her about its work on Friday.

Cyclone Nargis killed more than 78,000 people and left another 56,000 missing, according to the government, which has turned away aid offered by the United States and other countries.

Cindy McCain has visited Myanmar twice, including once when her husband met with pro-democracy leader and Nobel Peace Prize laureate Aung San Suu Kyi, who has been in detention for more than 12 of the past 18 years.

"The whole human rights issue in general comes down to things that move me the most," she said. "I'm a mother first and I cannot imagine what it would be like if No. 1, I couldn't feed my children and two, they were sick and No. 3, I was raped in the process. This whole issue is something that, yes, I would stay involved in."

Separately, Cindy McCain said the stir she caused in the presidential race earlier this year when she took exception to a comment by the wife of her husband's Democratic rival, Barack Obama, was unplanned and not a political ploy.

After Michelle Obama said in February that for the first time in her adult life she was proud of the United States, Cindy McCain pointedly said: "I have, and always will be, proud of my country."

Asked about her response to Michelle Obama's comment, Cindy McCain said in a CNN in an interview aired Thursday, "No, it wasn't a political opening, there was nothing planned."

"I'm an emotional woman when it comes to service to our country," she said. "I've watched many people's children leave and go serve. This is something that is the fiber of the McCain family. It was nothing more than me saying, 'Look, I believe in this country so strongly.' I think she's a fine woman, a good mother, and we're both in an interesting line of work right now."

Cindy McCain also showed her softer side Thursday while visiting the Vietnamese coastal town of Nha Trang where about 100 children born with cleft palates and cleft lips were awaiting free plastic surgery provided by the U.S. charity Operation Smile. The procedures will take place offshore on one of the U.S. Navy's floating hospitals, the USNS Mercy.

Cindy McCain has made several trips to the communist country where her husband was shot down during the Vietnam War and held for more than five years as a prisoner of war.

"This is what I do, and this is what revitalizes me, personally," she said. "The campaign is extremely important, of course, but this is also important to me, and so you try to balance everything."

Cindy McCain has been actively involved with Operation Smile since 2001 and is a member of its board of directors.

She has a special connection to Vietnam because she and her husband first helped a baby, Phuoc Thi Le, receive reconstructive surgery on her cleft palate and cleft lip in 1997 after a chance meeting with the girl's uncle in Arizona. Cindy McCain reunited with Le, now 11, during her one-day visit.

The McCains later adopted a daughter from Bangladesh who also was born with a facial deformity.

"When you see a child anywhere, say a child that doesn't have food or a child with a cleft palate who's been kept in a back room because the family is embarrassed or whatever it may be, it takes you back to really what's basic and what's really important," Cindy McCain said.

She also plans to visit Cambodia to participate in charity work there.