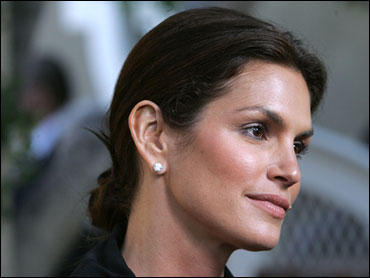 A German man who tried to blackmail supermodel Cindy Crawford with a photo of her bound and gagged 7-year-old daughter was sentenced to two years in jail Tuesday.

Edis Kayalar, 26, was found guilty after confessing that he tried to extort $135,888 from Crawford and her husband, Rande Gerber, last year using the photo, the court in the southern German town of Kirchheim unter Tech said.

A U.S. affidavit filed in the case said Kayalar believed he could have received $500,000 from the tabloids for the photograph and that he deserved more money from Crawford and her husband. Kayalar said he "was not trying to destroy a little girl's life, but the release of the photograph was not going to be something positive for the victims' image," according to the document.

The picture which showed the child gagged and tied to a chair was reportedly taken by a former nanny during a "cops and robbers" game.

Kayalar, lived illegally in the U. S. from 2007 to 2009, had an affair with the nanny and stole the photo from her last year, Judge Joachim Spieth told the Associated Press.

In July 2009, Gerber met Kayalar, paid him $1,000 "for his troubles" and got a print of the photo. But Kayalar came back asking for more.

After being deported to Germany from the U.S. for an immigration violation, he upped his demands, Spieth said.

Because that sum was never paid out, Kayalar was sentenced only for attempted extortion, Spieth said.

The German court took up the case because Kayalar was in Kirchheim unter Tech when he demanded the money, Spieth said.

The maximum sentence for attempted blackmail is five years. The sentence is lower because the plaintiff confessed, he said.

Crawford, who divorced actor Richard Gere in 1995, married Gerber in 1998. They have two children.