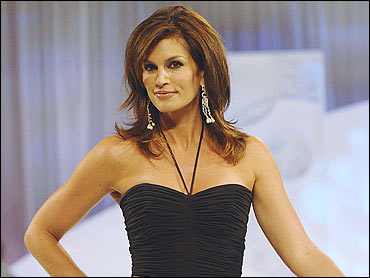 LOS ANGELES (CBS/AP) Extortion suspect Edis Kayalar was charged Thursday with trying to shake down $100,000 from former supermodel Cindy Crawford and her entrepreneur husband Rande Gerber, over a picture of their daughter bound to a chair and gagged, police said.

The 26-year-old German man has not yet been arrested. He was recently deported to Germany and is believed to be in Stuttgart, authorities said.

He was charged with one count of extortion. If convicted, Kayalar could face up to two years in prison. It was not clear if he has an attorney in the U.S.

The photo was purportedly taken by Crawford and Gerber's former nanny earlier this year and shows the girl, then 7, bound to a chair wearing shorts and a T-shirt.

The daughter told her parents, who were unaware of the photo, that the nanny took the picture as part of a "cops and robbers" game, according to an affidavit filed in the case and first obtained by The Associated Press.

The nanny, whose name wasn't released, has not been charged. She was fired a week before Kayalar called the couple.

Kayalar stole the photo from the nanny and repeatedly sought to get money from Crawford and Gerber, starting in July, according to the document.

Kayalar initially said he wanted to return the photo because he was a good person and didn't want to see it land in the tabloids, the affidavit said.

Gerber later met with him at a bar, where Kayalar showed him a copy of the photo and said he also took a handwritten note from the nanny's apartment that read, "The baby sitter went crazy and tied everyone up and they need your help! Please."

The nanny said she had taken the picture as a prank and was going to post it and the note on the front door of the family's house, according to the affidavit. The nanny never went through with the joke.

Gerber eventually got the photo from Kayalar and paid him $1,000 in cash "for his trouble," the affidavit said.

But Kayalar is accused of demanding more money while saying he had another copy of the photo.

"He believed he could have received $500,000 from the tabloids for the photograph and that he deserved more money from them," the document said.

Kayalar was taken into federal custody for an immigration violation three months ago and deported. However, he called Crawford and Gerber again on Nov. 1 and threatened to sell or release the photo to the media if his demand for $100,000 wasn't met, the affidavit said.

Kayalar said he "was not trying to destroy a little girl's life, but the release of the photograph was not going to be something positive for the victims' image," according to the document.

Kayalar allegedly gave Gerber a German bank account number and routing information and said the money should be wired within three days or the photo would be made public.

The last contact was an e-mail sent Tuesday to Kayalar at the direction of the FBI that indicated the payment would be made later this week. No money has since been paid to Kayalar.

Crawford's spokeswoman Annett Wolf issued a statement saying, "Rande Gerber and Cindy Crawford intend to pursue any and all available legal action against anyone who aids the perpetrator in the distribution or sale of the photograph of their daughter."

Crawford, who divorced actor Richard Gere in 1995, married Gerber in 1998. They have two children.