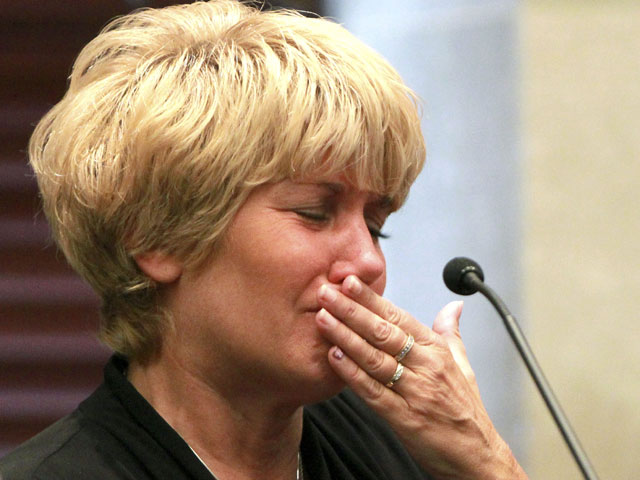 (CBS/WKMG/AP) ORLANDO, Fla. - Casey Anthony's mom, Cindy, broke down in tears on the witness stand Tuesday as prosecutors played a 911 tape in which she reported her granddaughter missing.

Cindy Anthony called 911 three times as a threat to her daughter. The first time, she reported that Casey Anthony had stolen her car. She asked where she could bring her daughter to turn her in for grand theft, reports CBS affiliate WKMG.

While being transferred to the Sheriff's Office, Cindy Anthony can be heard threatening Casey Anthony to get a court order to get custody of her granddaughter, Caylee, reports the station.

Once Cindy and Casey Anthony returned home, the calls became increasingly panicked and Cindy Anthony eventually told a 911 dispatcher that her granddaughter had been missing for a month.

"I have a possible missing child. I have a 3-year-old that's been missing for a month," Cindy Anthony told the 911 dispatcher, reports WKMG.

Cindy Anthony told the dispatcher she needed a deputy to come to the family home and arrest Casey Anthony for car theft, although she added that Casey Anthony had permission to use the car.

After that call, Cindy Anthony said she overheard her daughter saying that Caylee had been gone for 31 days and she was taken by the nanny, Zenaida "Zanny" Gonzalez. In opening statements, the defense conceded that Caylee had not been kidnapped, but said that she had drowned in the family pool on June 16, 2008.

Cindy Anthony then called 911 again before deputies arrived at her home.

"It smells like there's been a dead body in the damn car," Cindy Anthony told a 911 dispatcher.

During cross-examination, Cindy Anthony said she did not know why she said that, she just blurted it out. She said she wanted the police to come as quickly as possible and she used that term as a figure of speech.

During the call, Casey Anthony was put on the phone and explains to the dispatcher that her nanny of several years took her daughter and she had been conducting her own investigation for several days.

Casey Anthony is charged with first-degree murder and could be sentenced to death if convicted. Defense attorneys say Caylee died in an accidental drowning in the family's swimming pool.