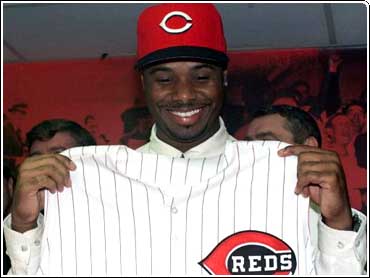 So many calls flooded the Cincinnati Reds' offices Friday that the phone system got overwhelmed and employees couldn't even get lines out.

Outside the Cinergy Field offices, there were lines of fans waiting to get into the lobby and lines of fans streaming from the ticket windows.

Politicians who took cover during yet another bad Bengals season were happy to be seen in photographs with Cincinnati Reds officials. Street corners buzzed with talk about some guy named Junior who was moving in from Seattle.

Ken Griffey Jr., one of Cincinnati's finest and baseball's best, was traded to his hometown team on Thursday night, and his hometown hasn't been the same.

It's positively giddy over Griffey.

"It's just been a 48-hour onslaught a very nice onslaught," said Mike Vassallo, the Reds' assistant director of media relations.

The Reds brought one of baseball's best players home on a private jet Thursday night after completing a four-for-one trade with Seattle. Griffey agreed to a nine-year contract that will keep him home for the rest of his career.

Even as Griffey's plane touched down, the Reds were unsure what kind of financial impact the trade ultimately would have on the 131-year-old franchise.

"I'll be honest with you, we won't know that answer until we get the response of the fans," chief operating officer John Allen said. "Over the last three months, we've been hearing, 'Get Junior, bring him home and we're coming out."

"So I can't tell you what the economic impact is. It's up to the fans to determine what that is."

The Reds got the first part of the answer Friday, when their office phone lines were so overwhelmed by calls about tickets that employees had trouble getting lines out.

"Since early yesterday, the phones have just been ringing constantly to the point where they've been tying up lines," Vassallo said. "We've been having trouble making and receiving calls. It's just been overwhelming."

There were lines at the ticket windows on a gray, raw day, and fans stretched out in the lobby waiting to order season tickets. The Reds wouldn't estimate how many were sold, but announced that windows would be open Saturday to accommodate the sudden demand.

"I think you could say unequivocally that it was one of the best days we've ever had, relative to selling tickets," spokesman Rob Butcher said.

Opening day already was sold out, so scalpers offered tickets Friday for many times face value just so fans could get that first glimpse of Junior in a Reds uniform.

The city hasn't gotten swept away by a baseball trade since favorite son Pete Rose returned as player-manger in a 1984 trade with Montreal. A lot had happened to dampen local interest in baseball in the last 15 years.

Rose's gambling scandal got him banned from the game, slurs by previous owner Marge Schott cast the team in a bad light, and the 1994 players' strike extinguished a lot of interest in the city that boasts of the sport's first professional team.

Griffey's return was exactly what it needed to make it seem like the good old days.

"While the dollars are not unimportant, the emotional lift that something like this gives to a community and the national visibility that it creates are probably even more significant," said Roger Ruhl, vice president of marketing for the local chamber of commerce.

Part of it was the circumstances. Griffey accepted tens of millions of dollars less than he could have made as a free agent so he could return to small-market Cincinnati. He agreed to a $116.5 million deal Thursday night with most of the money deferred until after he retires a move to help the tight-budget team.

"He makes a wonderful statement by choosing to sign a long-term contract here with an eye to completing his career in Cincinnati," Ruhl said. "This has created a great buzz around town and it's a great chamber of commerce story. What better story can there be than a youngster returning to his hometown?"

On the streets of Cincinnati, for now, there is no other story.