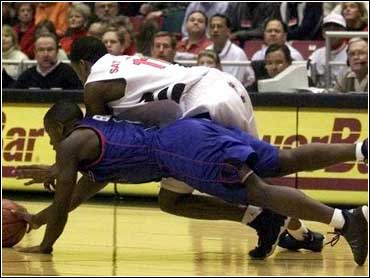 Cincinnati, with the nation's longest winning streak at 15 games, was No. 1 in The Associated Press college basketball poll Monday, the Bearcats' sixth straight week leading the rankings.

It was also the fourth straight week Stanford and Duke have been second and third in the Top 25.

There were changes down below, however.

Seton Hall moved in at No. 23, the Pirates' first ranking since they were sixth in the final poll of the 1992-93 season. Purdue came in at No. 25, the Boilermakers' first appearance since mid-December.

Duke (19-3) had its 18-game winning streak broken by Maryland last week and then beat Georgia Tech.

Arizona and Tennessee each moved up three places to fourth and fifth, while Michigan State held sixth.

Ohio State dropped two places to seventh and was followed in the Top Ten by Oklahoma State, Syracuse and Indiana.

The last five teams in the rankings were Utah, Maryland, Seton Hall, Kansas and Purdue.

Seton Hall (18-4) moved into the rankings after having won five straight games and eight of nine. The only loss was to Connecticut, the Pirates' opponent Monday night. Last Monday, Seton Hall handed Syracuse its first loss of the season.

Purdue (17-7) had been ranked as high as 19th before dropping out following a 20-point loss to Ball State. The Boilermakers have won four straight, including a 70-67 victory over Michigan State.

Vanderbilt (16-5), which fell out from 22nd, lost to Alabama on Saturday. The Commodores had been ranked the last four weeks, getting as high as No. 20.

Oregon had a two-week run in the rankings at 23rd and 24th. The Ducks (17-5) lost at Stanford last week before beating California.

Oklahoma State, which also beat two ranked teams last week Kansas and Oklahoma moved from No. 14 to No. 8, the Cowboys' first Top Ten ranking since they were eighth on Nov. 29, 1993.

Kentucky's lost to Florida and LSU and took the week's biggest drop, eight places to No. 19.