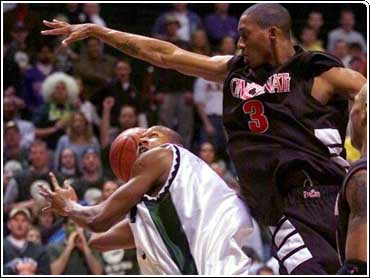 Freshman DerMarr Johnson, third in scoring for No. 3 Cincinnati, was suspended for one game Wednesday for violating NCAA rules on amateurism.

"This relationship occurred prior to us knowing DerMarr," Goin said.

"This is not a university issue, this is not a basketball issue; this is an amateurism issue. There is no culpability on the part of the university."

The NCAA told the university to sit Johnson down for a game, Brian McCann, the school's associate sports information director, said.

Johnson, a 6-foot-9 guard from Riverdale, Md., has been averaging 13 points a game.

Goin said Johnson accepted about $7,000 his senior year for academic expenses not covered by his scholarship to Maine Central Institute. One year's tuition is $22,500, Goin said.

"DerMarr didn't do anything wrong," Goin said. "He got nothing in his pocket."

The amount Johnson will have to pay back was being negotiated, Goin said, but Johnson was eligible to return to the Bearcats after Wednesday night's game.