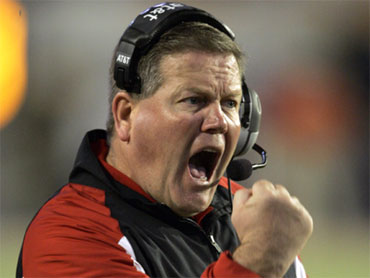 Brian Kelly will be Notre Dame's next football coach, according to two people familiar with the negotiations.

The two people confirmed to The Associated Press on Thursday that a deal has been reached with the Cincinnati coach. They requested anonymity because an official announcement had not been made.

Kelly was at a Cincinnati team banquet, where he was expected to inform his players of the decision.

Some members of the University of Cincinnati's board of trustees have been told of Kelly's decision, a person in the school's administration told the AP on condition of anonymity because the school had not made an announcement.

The 47-year-old Kelly is 34-6 in three seasons at Cincinnati, leading the Bearcats to back-to-back Big East titles and two straight Bowl Championship Series berths. The Bearcats set a school record last season for victories with an 11-3 record, then topped that with a 12-0 mark this season.

Notre Dame has been searching for a coach for about a week and a half since firing Charlie Weis.

Kelly has long admired Notre Dame, which seemed to be the perfect fit for an Irish Catholic coach raised in the Boston area. His name first popped up as a possible candidate last season before Notre Dame said Weis would be back for a fifth year.

When Kelly arrived in Cincinnati three years ago, then-university president Nancy Zimpher told Kelly she expected him to turn the football program into a Top 25 mainstay, win a Big East title right away and make sure his players graduate. He'll face even higher expectations at Notre Dame, where school officials expect the Fighting Irish to be competing for BCS berths regularly and to occasionally win it all.

It won't be easy.

The Irish have a 16-21 record over the past three seasons and just completed the worst decade of football in the history of the storied program with a 70-52 record and three losing seasons. A national title? Not even close.

Weis battled the perception that he was brash if not arrogant, and he'll be followed by man who also is supremely confident — though perhaps more skilled in dealing with the public relations end of the job, something that helped him win support for Cincinnati's program.

Kelly grew up in Chelsea, Mass., and went to Assumption College, a Catholic school in Worcester where he played linebacker while getting his degree in political science. The son of an alderman, he intended to go into politics after college and he even worked on Gary Hart's 1984 presidential campaign in the Boston area.

But football won out.

He learned how to be a head coach at Division II Grand Valley State in Michigan, where he won back-to-back national titles and 32 consecutive games over one stretch. Working with a limited roster taught him how to be creative, finding a niche for each player.

He moved on to the Mid-American Conference and turned Central Michigan into a winning program in only three years. He also gained confidence in his coaching philosophies and his preference for a wide-open offense. The Chippewas were ranked 26th nationally in passing in 2005.

Kelly was criticized in September of that year for remarks he made to the Detroit Free Press about perjury charges filed against two former Central Michigan players after other CMU players were charged with second-degree murder in the fatal beating of a man. The death happened shortly after Kelly was named Central's coach.

"A number of them were African-Americans that had been in that culture of violence, and they're taught to look away," Kelly said. "You don't want anything to do with it. Get out of there. You don't say anything to anybody."

Then-university President Michael Rao called Kelly's remarks "completely unacceptable" and Kelly apologized in an e-mail to students, faculty and staff. Rao then came out in support of the coach, saying he has a good heart and a record that showed a commitment to diversity.

In 2006, when Mark Dantonio left Cincinnati for Michigan State, UC decided that Kelly and his no-huddle, spread offense would bring a spark not just to the program but to the town, where college football ranked behind high school games in fan interest. The Bearcats couldn't even come close to selling out 35,000-seat Nippert Stadium.

Kelly arrived after the regular season, talked about winning Big East titles, and coached the Bearcats to a win over Western Michigan in the International Bowl, showing his adaptability as he used Dantonio's play books and players.

Kelly then set about putting his stamp on Cincinnati's program.

The Bearcats won 10 games his first season, set a school record with 11 wins and a Big East title the second and this season he had the high-scoring Bearcats (12-0) contending for a national title.