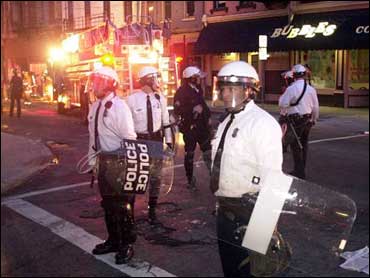 The Cincinnati city council Friday approved two legal settlements it hopes will improve relations between the police and the city's large black population.

The police union and the American Civil Liberties Union must vote on the settlements before a court-ordered deadline Tuesday. The Cincinnati Black United Front approved the deal Wednesday, the day it was announced.

If all parties don't support the settlement, the suit would go to trial and potentially cost the city millions of dollars in damages if it lost the case.

The council, also by a 9-0 vote, approved a companion agreement with the U.S. Department of Justice adopting the government's recommendations for improving policies governing police use of force, record-keeping for use of force and investigation of citizen complaints against police.

The department also must approve the agreement.

"Much work is ahead for all of us," Mayor Charlie Luken said. "The hardest part is the implementation of it. Now, let us move forward as a community and make this whole thing work."

Last April Cincinnati was rocked by three days of rioting following the shooting death of an unarmed black teenage suspect by a white police officer. Since then there have been at least two separate federal investigations into police conduct and a flurry of discrimination lawsuits were filed against the city.

Tensions that boiled over last spring are still simmering today. The economic embargo by some estimates has cost the city $20 million.

"It has been by any measure a really tough year," said Lukens. "There's not a whole lot I can point to and say that was good."

Cabbie Clavon Woodbridge understands blacks' frustration but says this boycott has hurt the very people it meant to help.

"And not just cab drivers," he said. "It's hurting everybody that's in lower-end jobs, like your hotel workers, your fast food, your restaurant workers."

This week's agreements are being hailed as a major step toward bridging the racial divide.

But the agreement which calls for sweeping reforms within the police department is by no means a done deal and there's no guarantee of a swift end to the ongoing boycott.

"The rubber's going to meet the road when people see what the price tag is in dollars and cents and also in terms of changing behavior," Father Michael Graham, the president of Xavier University, told CBS News, "and then we have to ask ourselves 'Are we ready to pay that?'"

It will cost Cincinnati $12 million to comply with both agreements and cover expenses including police staffing, purchase of computer systems and civilian oversight of the police, City Council members said. They said they hope to receive some federal funding.

ACLU lawyer Scott Greenwood said he thinks the financial help is likely because the Justice Department reached an agreement with Cincinnati, as opposed to battles with other cities over allegations of excessive use of police force.

Many here feel Cincinnati has already paid a high price by being singled out as a poster child for racial intolerance.

The mayor believes there's been more real dialogue between the races here in the past year, than in the hundred before.

"What happened in Cincinnati can happen in any city in America," said Lukens. "I suspect that there will come a time in the not too distant future where people are coming here to see how we handled our issues."

When that time comes, he hopes this city will be seen as an example of what's right, instead of what's wrong.