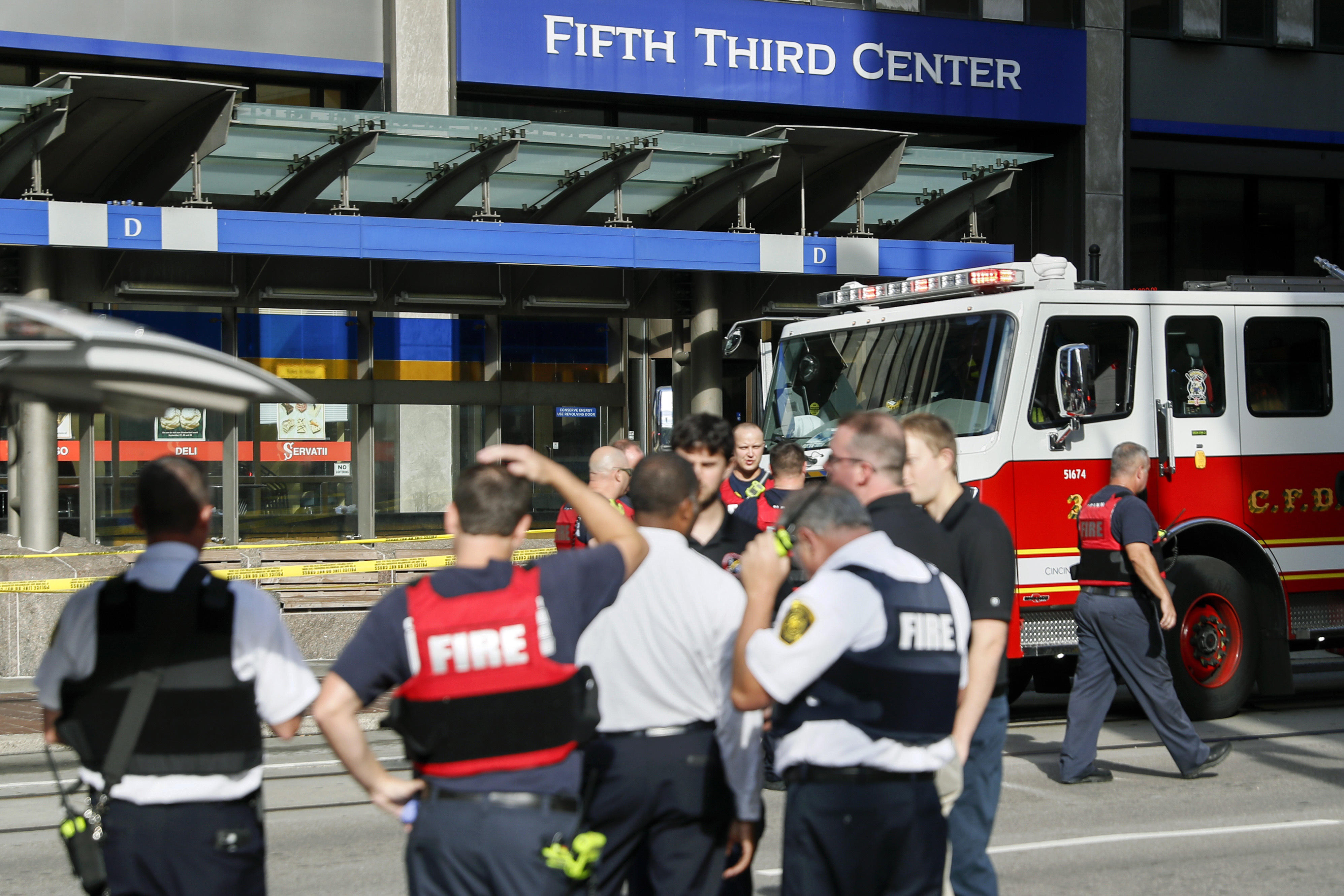 CINCINNATI -- A gunman opened fire Thursday morning in a building in the heart of Cincinnati in an attack that left him and three other people dead, police said. The shooting sent people scrambling across the city's Fountain Square amid cries of "shooter!"

It happened at a 30-story building, home to the corporate headquarters for regional banker Fifth Third Bancorp and other businesses, including popular ice cream, pastry and sandwich shops. The bank building was locked down for most of the morning, and surrounding streets and sidewalks were closed off.

Cincinnati Mayor John Cranley said the gunman was "actively shooting innocent victims" and that it was a "horrific" scene.

Police Chief Eliot Isaac said the shooter opened fire at about 9:10 a.m. at the loading dock of the Fifth Third Bank building. Isaac said the gunman then entered the bank's lobby where he exchanged gunfire with police. It was unclear if the gunman shot himself or was shot by officers.

"Our officers responded very quickly," Isaac said. "They engaged the threat, and they neutralized that threat; however, there was some tragedies that did occur ... You know, these are things that we see happening across the country, and we all have to be vigilant and prepared to deal with these situations."

The gunman was identified by police as Omar Enrique Santa Perez, 29. Fifth Third Bancorp said he was not a current or past employee, according to police Lt. Steve Saunders. He said police don't know yet why the gunman went to the building.

Saunders said more information was expected to be released Friday. Hamilton County prosecutors said the gunman was armed with a 9 mm gun and had no known local criminal record.

Police later swarmed an apartment in North Bend, Ohio, a village some 15 miles west of Cincinnati. They didn't immediately explain the search.

"So, a very horrific situation," Isaac said at the shooting scene. "We're in the very early stages" of the investigation.

Federal and state agents were on the scene as police searched through the building. Michael Richardson, who works in the building, told The Cincinnati Enquirer that he was standing outside the entrance when he heard gunshots in the lobby.

"I looked behind me and saw the guy -- he shot and then he shot again. After that I started running."

Jessica Hanson, a contractor with the bank's concierge company, works on one of the lower floors overlooking Fountain Square. She said after repeatedly hearing shots, she went to the window and saw people running and ducking for cover as officers started shooting into the bank.

She got back in the elevator and rode up to her floor, where Hanson said she was in complete shock and unable to form complete sentences. "Then we knew what was going on," Hanson said.

Jaenetta Cook, who manages Servatii Bakery on the building's first floor, said she hurried to lock the door after the first two shots were fired. Then, she heard more that "sounded as if they were getting closer and closer."

Cook said she and two other employees hid in the bathroom for the duration of the shooting. "I made it out to see my kids, to see another day," she said in relief.

One of the victims died at the scene. Two more died at University of Cincinnati Medical Center.

UC Health spokeswoman Kelly Martin said one victim remained there in critical condition. The hospital said on Twitter that another was upgraded to fair. All four taken to the hospital had gunshot wounds, Martin said.

Cincinnati Mayor John Cranley said the gunman was "actively shooting innocent victims." The Fountain Square often hosts concerts, dancing, food trucks and other events around lunchtime or in the evenings and is neighbored by a hotel, restaurants and retail shops.

"It could have been any one of us," Cranley said. He praised "the heroism" of police who ended the threat within seconds and the response of other emergency personnel.

"It could have been much, much worse," Cranley said. Witnesses described a chaotic scene, with people running away in fear and confusion while hearing gunshots.

Leonard Cain told the Enquirer he was going inside the bank when someone alerted him there was shooting. He said a woman, who was wearing headphones, didn't hear the warnings and walked into the bank and was shot.

Fifth Third operates some 1,200 banking centers in 10 states. The company in a statement said it's working with law enforcement and offers thoughts and prayers for "everyone caught up in this terrible event."