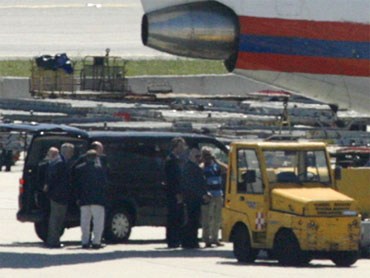 Panetta already had developed "a sound relationship" with Fradkov, head of Russia's Foreign Intelligence Service, the SVR, which allowed the two former adversaries to clinch the deal quickly. They agreed to trade 10 Russian sleeper agent arrested in the United States for four prisoners Russia had jailed as spies for the United States.

The talks that led to Friday's exchange of spies in Vienna began, the official said, shortly after the FBI arrested the Russian agents in the United States, because both sides wanted a speedy resolution of the case to avoid casting a pall over improving U.S.-Russian relations.

Other U.S. government figures helped Panetta negotiate the diplomatic angles of the talks, the official added, speaking on condition of anonymity to discuss sensitive intelligence matters.

The official added that the CIA and FBI already "basically knew everything about the Russian network when we rolled it up." He said that while the United States could have followed through with all the charges and locked up the Russian agents for years, it was clear the 10 Russian agents were more valuable as a trade.

Because they never had penetrated the U.S. government, the official said, they could not reveal any sensitive information. The official would not confirm whether anyone in the ring had ever handled classified information.

The suspects pleaded guilty to the least serious charges against them, of being unregistered foreign agents.

The official added that the swap should help remove an "irritant" that could have been an obstacle to U.S.-Russian relations.

A former CIA analyst and 50-year-plus veteran of the agency, Charlie Allen, said it was clear Moscow and the White House did not want the spectacle of a drawn-out trial of 10 "illegals" to derail the resetting of U.S.-Russian relations after years of friction.

The positive yield for U.S. intelligence, he said, is the signal it sends that the United States will bring in from the "real cold of Russian prisons ... individuals we can never abandon." He was referring to "The Spy Who Came in from the Cold," the 1963 John Le Carre novel that described Cold War espionage.

Allen said the CIA's relocation program for such spies "is quite good. It was once terrible." He did not elaborate.

"Illegals are in the Russian services' DNA and, rest assured, the SVR will continue" using them.

Allen spoke Thursday night after a fundraising gala, in honor of the CIA's fallen, headlined by movie actor Dan Aykroyd. The spy swap was the talk of the event.