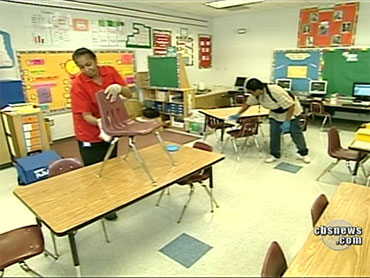 The visit came more than a week before Pakistan began pouring troops into its remote tribal regions in an operation to round up al Qaeda suspects. It has long been believed that bin Laden, the prime suspect in the Sept. 11 terror attacks, is hiding in the region along Pakistan's border with Afghanistan.

"Both sides shared views and information," an intelligence official familiar with the agenda of the meeting told The Associated Press. He spoke on condition of anonymity.

The U.S. Embassy in Islamabad declined comment and the Foreign Ministry refused to confirm the visit.

Tenet discussed the implications of the nuclear black market with Pakistani intelligence officials, the official said.

Khan was pardoned by President Gen. Pervez Musharraf on Feb. 5 following his confession. Washington has said the pardon was an internal Pakistani decision, and that it was most concerned with shutting down Khan's network.

Still, troops have stepped up patrols in the rugged area, placing heavy guns on key roads and taking positions in sandbagged bunkers in the key town of Wana in tribal South Waziristan.

"I cannot tell you about the exact timing or place of the operation, but it will start very soon," said Mohammed Azam Khan, a local government official.

Khan said that all those suspected of being "foreign terrorists" will be arrested.

"Tribal elders have given us assurances that no foreign national is now living in their areas, but still we want to satisfy ourselves," he said. "A house-to-house search will be conducted."

The operation is the fourth of its kind since the Sept. 11, 2001 terror attacks in the United States. It will center on suspected Taliban and al Qaeda men who authorities believe have married Pakistani women and are living in the tribal areas.

Pakistan has been a key ally of the United States in its war on terror, and Pakistani security forces have captured more than 500 suspected al Qaeda and Taliban fugitives since the attacks on the World Trade Center and the Pentagon. Among the captured are key figures in bin Laden's terrorist network.

Musharraf escaped two assassination attempts in December which he blamed on al Qaeda. The government has provided no evidence to support his claim.