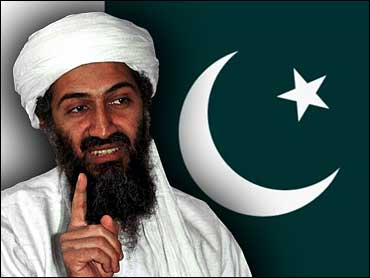 CIA Director Leon Panetta says he believes Osama bin Laden is still in Pakistan. The spy agency hopes to close in on the al Qaeda leader as Pakistan's military cracks down on the tribal area where he is thought to be hiding.

Panetta told reporters after a speech on Capitol Hill that finding bin Laden remains one of the CIA's top priorities. He said he hopes that the combination of increased CIA activity and the Pakistani military offensive will give the United States a better chance of nabbing him.

Panetta said in his speech that the CIA has increased the number of officers and agents in Pakistan who are providing targeting and other information to attack the al Qaeda network there.

The new assessment comes as Pakistan has unleashed a new military campaign in the country's Waziristan region along the Afghan border, driven mainly by a combination "quick strikes" on suspected Taliban militant targets as well as all out attacks, senior government officials and Western diplomats said, reports CBS News' Farhan Bokari.

Scores of Taliban were killed in two days of fighting after the military went on the offensive earlier in the week to block up to 800 Taliban militants from traveling from Waziristan to the nearby Bannu region, Pakistani government officials said Thursday. There were conflicting accounts of the number of people killed.

On Tuesday, suspected Taliban militants launched a devastating attack on the luxury Pearl Continental Hotel in Peshawar, the northern city and capital of the northwestern frontier province (NWFP) where Waziristan and Swat are both located. At least 16 people, including two U.N. officials were killed and up to 70 injured in that attack.