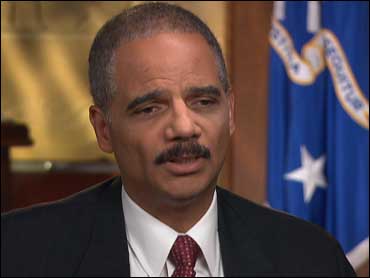 Seeking to move beyond what he calls a "a dark and painful chapter in our history," President Barack Obama said Thursday that CIA officials who used harsh interrogation tactics during the Bush administration will not be prosecuted.

Even as they exposed new details of the interrogation program, Obama and Attorney General Eric Holder, offered the first definitive assurance that those CIA officials are in the clear, as long as their actions were in line with the legal advice at the time.

Mr. Obama said the nation must protect the identity of CIA contractors and employees "as vigilantly as they protect our security."

"We have been through a dark and painful chapter in our history," the president said. "But at a time of great challenges and disturbing disunity, nothing will be gained by spending our time and energy laying blame for the past."

Holder told the CIA that the government would provide free legal representation to CIA employees in any legal proceeding or congressional investigation related to the program and would repay any financial judgment.

"It would be unfair to prosecute dedicated men and women working to protect America for conduct that was sanctioned in advance by the Justice Department," Holder said.

The CIA has acknowledged using waterboarding, a form of simulated drowning, on three high-level terror detainees in 2002 and 2003, with the permission of the White House and the Justice Department.

The memos claimed waterboarding worked. Abu Zubaydah, for example, identified Mohammed or KSM as the 9/11 mastermind, reports Orr and KSM in turn gave interrogators details of potential plots including a plan to launch a second wave of attacks.

Former CIA Director Michael Hayden said waterboarding has not been used since, but some human rights groups have urged Mr. Obama to hold CIA employees accountable for what they, and many Obama officials and others around the world, say was torture.

Further, the statements accompanied the Justice Department's release of four significant Bush-era legal opinions governing - in graphic and extensive detail - the interrogation of 14 high-value terror detainees using harsh techniques beyond waterboarding, the officials said. One of the memos was produced by the Justice Department's Office of Legal Counsel in August 2002, the other three in 2005.

Read more about the release of the memos.

The memos, released to meet a court-approved deadline in a lawsuit against the government in New York by the American Civil Liberties Union, detail the dozen harsh techniques approved for use by CIA interrogators, the officials said. One memo also specifically authorized a method for combining multiple techniques, a practice human rights advocates argue crosses the line into torture even if any individual methods does not.

"It was carrot and stick for the Justice Department toward Bush officials," said CBS News legal analyst Andrew Cohen. "The good news for the architects of our torture policies is that they DOJ apparently will not prosecute them. The bad news for Bush officials is that the DOJ further embarrassed them by releasing more appalling torture memos dating back to 2002."

The Obama administration last month released nine legal memos, and probably will release more as the lawsuit proceeds. But the four released Thursday represent the fullest, and now complete, accounting by the government of the methods authorized and used, the officials said.

The CIA also sought permission to put suspects in a box and then fill the box with insects.

Among the things not allowed in the memos were allowing a prisoner's body temperature or caloric intake to fall below a certain level, because either could cause permanent damage, said senior administration officials. They discussed the memos on condition of anonymity to more fully describe the president's decision-making process.

The ACLU suit has sought to use the Freedom of Information Act to shed light on the treatment of prisoners - even though the Bush administration eventually abandoned many of the legal conclusions and the Obama administration has gone further to actively dismantle much of President George W. Bush's anti-terror program.

Mr. Obama has ordered the CIA's secret overseas prisons known as "black sites" closed and ended so-called "extraordinary renditions" of terrorism suspects if there is any reason to believe the third country would torture them. He has also restricted CIA questioners to only those interrogation methods and protocols approved for use by the U.S. military until a complete review of the program is conducted.

The documents have been the subject of a long, fierce debate in and outside government over how much officials should say.

The Bush administration held the view that the president had the authority to claim broad powers that could not be checked by Congress or the courts in order to keep Americans safe. Obama and Holder, among others, have said that the use of such unchecked powers has actually made Americans less safe, by increasing anti-U.S. sentiment, endangering American troops when captured and handing terrorists a recruiting tool.

"Enlisting our values in the protection of our people makes us stronger and more secure," Mr. Obama said in his statement.

Even so, the officials described the president's process of deciding how much to release in response to the suit as very difficult. Over four weeks, there were intense debates involving the president, Cabinet members, lower-level officials and even former administration officials.

Former CIA Director Michael Hayden said the Obama administration is endangering the country by releasing the memos. Hayden told The Associated Press the release will give terrorists a precise guide for what to expect in a CIA interrogation if those methods are ever approved for use again.

But in the end, the view of the Justice Department prevailed, that the FOIA law required the release and that the government would be forced to do so by the court if it didn't do so itself, the officials said.

In his statement, Mr. Obama said he was reassured about the potential national security implications by the fact that much of the information contained had already been widely publicized - including some of it by Bush himself - and by the fact that the program itself no longer exists.

He said "exceptional circumstances surround these memos and require their release" and does not change his determination to keep other intelligence operations secret and information about them classified.

But, said Mr. Obama, "Withholding these memos would only serve to deny facts that have been in the public domain for some time. This could contribute to an inaccurate accounting of the past, and fuel erroneous and inflammatory assumptions about actions taken by the United States."

Those assurances are not likely to innoculate Obama against criticism from conservatives. Last month, Vice President Dick Cheney said, for instance, that Obama's decisions to revoke Bush-era terrorist detainee policies will "raise the risk to the American people of another attack."