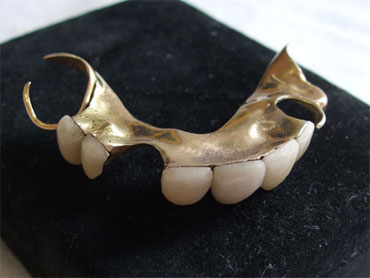 A partial set of dentures used by former British leader Winston Churchill - described as the teeth that saved the world - sold at auction Thursday for 15,200 pounds ($23,723.)

The upper dentures, one of several sets specially made for the wartime prime minister, were crucial for maintaining his distinctively slurred speaking style famous from World War II-era radio broadcasts.

"From childhood, Churchill had a very distinctive natural lisp; he had trouble with his S's," said Jane Hughes, who is head of learning at London's Hunterian Museum, a medical museum run by the Royal College of Surgeons.

"He wanted to maintain (the lisp) because he was already so well known for it," she said. "The dentures wouldn't quite connect with the top of the mouth, but that was on purpose."

The museum displays a duplicate set of Churchill's dentures, with the caption "the teeth that saved the world." They are on show in a glass cabinet alongside other famous teeth - including dentures worn by Queen Caroline, the estranged wife of King George IV.

Churchill had many problems with his teeth as a child and probably lost some of them quite early. He regarded the skill of his dentist, Wilfred Fish, so highly that he nominated him for a knighthood.

Fish's technician, a young man called Derek Cudlipp, started making sets of identical dentures for Churchill before the war - when the politician was in his 60s. Three sets were made and worn on a rotational basis because Churchill often broke them, and Cudlipp was frequently called to Downing Street to provide a spare set.

The state of the dentures often hinted at how well the war effort was going, said Nigel Cudlipp, the son of the technician and the seller of the set of teeth at Thursday's auction.

"Churchill was not a man who was gifted with a lot of patience, and when things were going badly he would put his thumb behind the teeth and flick them across the room," he said.

"My father was in his early 20s, very shy. He probably found him quite overwhelming," he said, adding that Churchill even prevented his father from joining the military so that he could be on standby.

The false teeth were bought by a British collector of Churchill memorabilia at an auction in England at three times the estimated price. Keys Auctioneers said the man previously bought a microphone said to have been used by Churchill to announce the end of the war.

Meanwhile, a British publisher announced it would release a complete digitized archive of papers documenting his life.

Bloomsbury Publishing announced Thursday about 1 million pages of the papers, including everything from childhood school reports to private letters and notes, can be accessed online through libraries and schools starting in 2012.

The vast collection is currently housed in 2,500 boxes in a dedicated archive center in Cambridge, England.