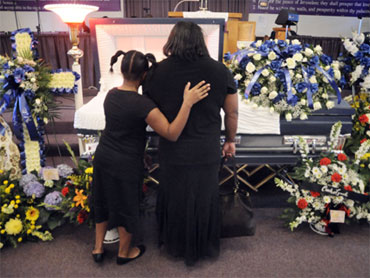 A pair of tall black boots and a lunch pail sat near the altar Sunday at the New Life Assembly church - a memorial to the 29 men killed in the worst U.S. mining disaster since 1970 and a thank-you to those who make their living inside the mountains.

This day, the first Sunday since last Monday's explosion killed 28 workers and a contractor at Massey Energy Co.'s Upper Big Branch mine in Montcoal, was for many a time to honor the profession. Tears of mourning fell, and arms swayed in worship among the 50 people gathered at the church.

Pastor Gary Williams, who has worked at Massey Energy mines for 18 years, knew many of the victims. On his way to church Sunday morning, he heard Ricky Workman's name among them for the first time.

Some of those who died have already been laid to rest, though crews were still working Sunday to remove the bodies of several others who didn't make it out.

Four funerals were held Friday, with more scheduled for the weekend. Nearly two dozen will follow in the weeks ahead. Despite hope that four missing miners might survive long enough for rescuers to reach them, officials announced early Saturday morning that the four had apparently died instantly.

A complete list of victims has yet to be released. Two other miners were injured in the blast, and one remains hospitalized.

A team of federal investigators will arrive Monday as officials try to figure out what caused the blast. Virginia-based Massey has been under scrutiny for a string of safety violations at the mine, though CEO Don Blankenship has defended the company's record and disputed accusations that he puts profits ahead of safety.

Authorities have said that high levels of volatile methane gas may have played a role in the disaster. Massey has been repeatedly cited and fined for problems with the system that vents methane and for allowing combustible dust to build up.

During a homily in Wheeling on Sunday, Catholic Bishop Michael J. Bransfield said four years is too short a time between West Virginia mine disasters. The last was at the Sago Mine in 2006, where 12 men perished.

"Can those entrusted with the protection of miners be trusted to fulfill the jobs and enforce the laws?" he said. "Is our technology in the U.S. mines in 2010 equal to the technology that is easily available in other industries? Is it safer to travel in space than to work in a West Virginia mine?"

At churches in the southern West Virginia coalfields, however, the focus was on reflection.

Judy Walker, whose longtime friend Workman died in the accident, stood before the altar at New Life Assembly in tears, mourning the heartache of families she helped cook for this week as they awaited word of their loved ones' fates. 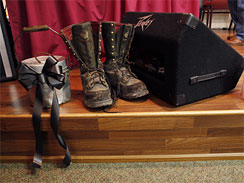 (AP Photo/Carolyn Kaster)
"All we can do is love on them. When you see them out, hug on them," she said. "Just let them talk about their fathers, brothers and sons."

(Left: A pair of coal mining boots and food pail sits on a stage at the New Life Assembly church in Pettus, W.Va. on Sunday.)

The tragedy has shaken many in this region filled with coal mines, where many people make their living in the mines or know someone who does. After all, the work is generally stable and pays better than most other jobs in the area. Indeed, Walker's husband of 38 years, Butch, won't tell her about his worries underground.

Several followers, including the pastor's wife, thanked the miners in the congregation for the work they do.

"A lot of people ask, Why do they do it? Why do they go into the mines and put theirselves in danger?" said Ina Williams. "It's West Virginia. They sacrifice whatever they need to do to support their families."

She then turned to her husband, a black ribbon and tiny gold cross pinned to his pale yellow shirt, and thanked him - not only for the work he does underground, but for the way he's represented the communities along the Big Coal River this week.

"He has shown over and over, especially this week, God's love. He loves this community, he loved those men, he loves these people," she said. "These men are not going to be forgotten."

More on the Upper Big Branch Mine Explosion: