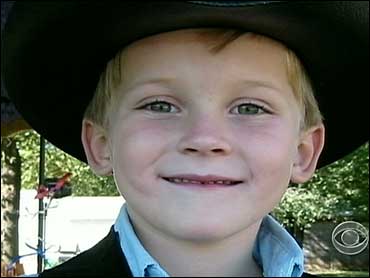 The place Nancy and Mac Madill chose to renew their wedding vows after 50 years may not look like much, but to them, it's sacred ground.

"It is here because God spoke to a little boy and told him he wanted it here," said the preacher during the service.

That child, their grandson Mackintyre, was determined to build a church on their west Missouri farm, reports CBS News correspondent Cynthia Bowers.

"When Mackintyre was about 6 years old, he walked up on this hill and stomped his foot on the ground and said this is where it's going to be, right here," said his mother, Stacy Garton.

An unusual demand considering Stacy and his father Glen weren't regular church-goers, but that was Mackie: an inventive child who wired his own playhouse and was given to building things, especially things related to his greatest desire, like a model of the church he wanted so badly.

By the time he was 9 years old, he'd saved up more than $1,000 toward his church, and the family realized there was just no saying "no" to Mackintyre. But no one could have imagined that he wouldn't live to see it built.

"He said, 'Mommy, my head hurts really really bad,' and he look at me funny, and I said, 'Can you see me?' and he said 'I can't see you out of my right eye,' and he looked at me and said, 'Mom, you need to call somebody,'" Stacy said.

A few minutes later, the 9-year-old was dead from a brain aneurysm.

"It's just is one of those stinking freak things that you never imagine," Stacy said. "In fifteen minutes, your life has changed forever. And you can't fix it."

Broken-hearted beyond belief, Stacy and Glen knew they had to make Mackintyre's dream come true.

Using Mackie's $30,000 inheritance money, family, friends and volunteers worked through bone-chilling cold, raising a church next to the rugged cross marking the boy's grave. Saturday, for the first time, there was joy.

"If he were here, he would just, he'd be thrilled," said Glen. "He would just be running around here laughing, knowing that he brought all these people here."

"What do you say to people who would say if there is a God he wouldn't have taken your little boy," asked Bowers.

While the family struggles to understand Mackie's plan, his church will always be there, open to anyone seeking comfort.